Course: Introduction to the Old Testament (Hebrew Bible)
and
Introduction to the New Testament History and Literature
Length: ~25 50-minute lectures each
School/platform: Yale OCW
Instructor: Christine Hayes, Dale Martin
Quote:
This course examines the Old Testament (Hebrew Bible) as an expression of the religious life and thought of ancient Israel, and a foundational document of Western civilization. A wide range of methodologies, including source criticism and the historical-critical school, tradition criticism, redaction criticism, and literary and canonical approaches are applied to the study and interpretation of the Bible. Special emphasis is placed on the Bible against the backdrop of its historical and cultural setting in the Ancient Near East.
…
This course provides a historical study of the origins of Christianity by analyzing the literature of the earliest Christian movements in historical context, concentrating on the New Testament…. the importance of the New Testament and other early Christian documents as ancient literature and as sources for historical study will be emphasized. A central organizing theme of the course will focus on the differences within early Christianity (-ies).

Since several of the books I’m reading this summer concern Biblical materials or religious history, I decided it might be a good idea to run through these online lectures. I’ve done several versions of “Bible history” over the decades, some through religious sources, some academic. When I was organizing my books after my recent move, I noticed the “religion/philosophy” shelf was almost equal to the mass of the “medical” shelf. But I keep forgetting. 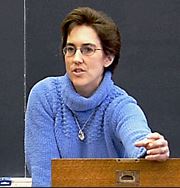 The first course on the Hebrew Bible was more or less formal lecture and covered the expected material: the J, P, D, and E sources, which prophets were Northern Kingdom and which were Southern, who was pre-exile, post-exile, and trans-exile, etc. The instructor demonstrated great fondness for the texts, and made convincing arguments that, contrary to later opinion in Christian culture, Judaism was not all about law and rules. The origin of some of the most familiar Biblical stories in ancient mythologies from around the middle East, the changing covenant with God from suzerainty to a more Zionist approach to the less concrete displayed in Job are outlined, along with the history that provoked these changes. I always thought the book of Job was one of the earliest in the Bible; turns out, the basic story is very old, but the philosophical construction reflects a much later period in ancient Israel’s history.

The New Testament instructor took a more casual, interactive approach, injecting frequent humor and asking for input from the in-person class. The formation of the Canon was a running theme, as was the wide variety of Christianities that existed in the first two centuries and the texts that were winnowed from what has now become the standard Bible. Viewing the Bible as a library, rather than as a single book, was a helpful way of dealing with some of the contradictions found between different books. Different views of Jesus as seen through different Gospels – including a few that aren’t in most contemporary Christian canons – were lined up with possible authorships. Paul’s letters were thoroughly covered, as well as the pretend-Paul letters and other letters that show various types of Christianity in the first couple of centuries after Christ.

Both courses generally focused on textual and historical methodologies, but offered several alternatives for reading the texts, and acknowledged the validity of theses approaches for various purposes. Transcripts of each lecture are available; in some cases, handouts are provided, particularly in the NT course. Videos of the lectures can be watched on the Yale Open Courseware site or on Youtube: Hebrew Bible lectures, New Testament lectures.

Many years ago, when I was still paddling around organized religion trying to find something that made sense, I heard a sermon that advised something like: “If you study the Bible a little, you might decide it’s all nonsense, but if you study it a lot, you start to understand its Truth.” Maybe I just haven’t hit the turnaround point yet. Particularly in this age when the Abrahamic religions are often not showing themselves as particularly inspired by a God of Love, I feel like it’s all a giant Rorschach test and what we see in the Bible is more a reflection of what we want to see than of any actual Truth. Man creating God, circa 2019 instead of 500 BCE. But it’s an interesting way into ancient history.

Both courses make it clear early on that the purpose is not spiritual guidance or any kind of theological exploration, but an examination of the Bible as a text. It’s a useful course for anyone interested in an originalist view of scripture, and understanding how history and circumstances at the time of writing shaped the texts. Because it’s an introductory course, there are lots of open questions left and other avenues to explore, but it’s a good way to define those questions and directions for further work.