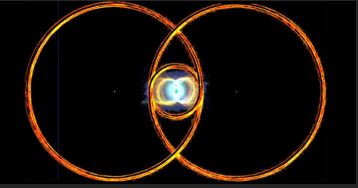 I often imagine my walks as two circles of concurrent experiences. One circle is external and sensuous – footfalls and bird song, rain – the physical journey: the other circle is internal and imaginal – ponderings and conjunctures, dreamscapes – the figurative journey. Now and then these two experiential circles overlap, forming a mandorla. in their slender overlay I occasionally encounter an infusion of both worlds: the imaginal strikingly present in common things.

On a routine morning walk through a park near his home, Landretti noticed something unusual: a stick in a tree. Not a branch, but a log that obviously came from somewhere else. He spent the rest of his walk wondering how the branch had come to rest in the ash tree’s branches, then realized it intrigued him because it looked like a fish. A coelacanth, to be precise: a fish thought to have gone extinct 66 million years ago until live specimens were discovered in 1938 swimming in the waters off Africa. That experience led to this essay about the human capacity for perception.

My experiences reading nature writing has always been uneven, but perception is a different matter. As it happens, I’ve taken several moocs dealing with our capacity to view the world and how our retinas, cochleas, and other sensory organs convert input signals into comprehension, such as this excerpt from a lecture by Dartmouth neuroscientist Peter Tse:

Scientists largely agree that there is no redness out there in reality. Redness is a construction of our perceptual systems that exists in our conscious experience, but is not a property of reality-in-itself. What is presumably real are pigments in the surfaces of the flower-in-itself, and the pigments we experience as red. But redness and those pigments seem to exist in two different domains, one in consciousness and the other in the world-in-itself, regardless of how it is being experienced or even whether it is being experienced.

Landretti also discusses the phenomenon known as pareidolia, our predeliction for seeing patterns in randomness, be it mythical characters in arrangements of stars or a Man in the Moon (or a rabbit, a more common interpretation in China), enlisting the help of a Peanuts cartoon in which Charlie Brown sees a duck and Linus sees a scene of St. Phillip’s martyrdom.

All of this takes place in the discussion of the intersection between the physical and the metaphysical, emblemized by the mandorla. I’d never encountered the term before, and initially wondered if it was a variation on mandala; but despite a vague similarity – they are both artistic expressions of religious concepts, one from Buddhism and one from Christianity, one word descending from Sanskrit for circle and the other from the Italian word for almond – on casual research I can find no etymological or semantic connection.

The mandorla is the intersection of two circles; Venn diagrams come to mind, but these circles are representative of heaven and earth, typically encasing images of Jesus or Mary as liminal figures. In Landretti’s case, he sees these more as intersections of imaginal and physical, reality and perception. The essay celebrates this blending of fact and fancy with references to a host of examples and analogues in addition to Charlie Brown, from Nabokov to Emily Dickinson.

This was obviously a profound experience for Landretti, and he relates it with thoughtful appreciation for the mysticism. Me, I prefer the neuroscience route, but there’s room for both.