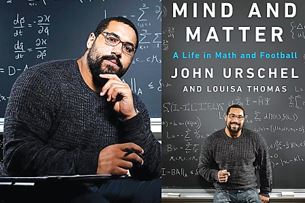 I am a mathematician, a PhD candidate at MIT.
I am also a former professional football player, a retired offensive lineman for the Baltimore Ravens.
Many people see me as a walking contradiction. They think that the pursuit of excellence in football makes the pursuit of excellence in mathematics impossible. They think that a strong interest in one makes a strong interest in the other improbable.…
I don’t spend a lot of time wondering about the ways in which I’m an anomaly. My life is the only one I know. It’s normal to me. We all have multiple and diverging identities. In different ways, math and football are both essential to me.

I’ll admit, I see football and math – at least, when done at the high levels like the NFL and an MIT doctorate – as an improbable pairing. It’s not that an interest or talent in one would preclude interest and ability in the other; it’s the time and focus needed to reach the NFL or MIT. Urschel managed to pull it off, then wrote a book describing his journey so far.

Don’t expect to find an easy secret; there isn’t one. Urschel points to two innate characteristics that helped: his ability to compartmentalize – to focus on football during football time and to focus on math during math time – and his work ethic. I’d add to that a passion for both fields, which includes curiosity, a need to go beyond showing up for class or practice whether it’s reading extra books or observe expert players and put in the extra work to fully understand or develop skill. I don’t know much about how football players talk about football, but I know a little about how mathematicians talk about math (at least, publicly) and he talks about math like a mathematician. I can only assume football players will see the same feature in his description of practice and games.

I’m sometimes asked about the connection between math and football. People want to know what edge being good in a classroom gave me on the field. I know what they want to hear, and I usually give it to them. I talk about basic physics, intelligence, and problem solving. But the truth is, football and math or disjoint in my experience. When the ball is snapped, I’m not thinking about vectors and forces. I’m not really thinking about much of anything. I’m simply moving.
Math gives me a way of making sense of the world. It helps me see past the confusion of everyday life and glimpse the underlying structures of the universe. It reveals the properties of shapes and the prevalence of patterns. It describes the relationships between things. I’m drawn to the rigor and clarity of mathematics, and to the elegance and simplicity of solutions to even the most complex problems. …
Football put me in contact with something messier, something elemental and deep within me. Its strength and not only my body, but also my confidence and will. …I never had as much raw athletic talent as a lot of the guys I played with and against. I relied on my intensity and competitiveness and desire.

I smiled when I read this. It comes from years of algebra and calculus teachers trying to find ways to make math interesting or engaging to their students, while teaching calculation techniques and assigning twelve differentiation problems that are boring as snot. So they bring in, as Vi Hart has said, shopping and sports, because kids love shopping and sports so of course they’ll be interested in how the path of a ball can be predicted from starting speed and position or the price of an object from the percent markup. No, they won’t, but it’s the best they can do. And in the meantime, Urschel is explaining the birthday problem, which I’ve run into several times in various probability moocs – if you have 23 people in a room, there’s about a 50% chance two of them have the same birthday, and once you get more than about 60 people, it’s almost a sure thing. That’s interesting because it seems wrong, so he explains how it works in terms anyone can understand. Or skip the explanation, if you really want to; it won’t diminish the rest of the book. But it’s fun.

Urschel didn’t realize he had any special math ability for a long time. As a college freshman, he started out in Engineering, but took all the math classes and had to be forced to take any engineering at all. Even when he realized it was math all along, he wasn’t focused on being a mathematician, because he wasn’t sure what a mathematician did all day. It wasn’t until he worked on a paper solving a heretofore-unexamined problem that he finally understood:

Again, this made me smile. I’ve said before that in high school, I assumed that mathematicians wrote problems for math books. It wasn’t until recently, when I could look over the shoulders of mathematicians at work through moocs and Twitter and blogs and books, that I realized that idea was wrong.

After high school, Urschel had offers from several colleges, including Princeton, which made his mom swoon (she still hoped he’d be an aeronautics engineer – a rocket scientist). But he chose Penn State, because of football, rather than the academic program (forgive me, but apparently Penn State is a big deal in college football?). It was in a class on differential equations, when he solved a fifth-degree polynomial in his head (the professor posed it as a problem that could not be solved by traditional methods, and was shocked when he raised his hand and gave the correct answers) that he realized math was something he was good at – and something that was way more interesting than he’d realized.

He describes being something of an underdog on the football field, and his way of dealing with it:

I didn’t know what the others would see in me either. I was an undersized recruit, and not prized. I had terrible technique. I was well aware that didn’t really to be the one no one wanted to be around. ….
So I kept quiet period there was only one way I knew how to deal with the uncertainty: control what I could. I could keep my head down. I couldn’t turn myself into some outgoing social person automatically I could be respected. So I’d listened calmly when the coaches yelled at me, which they did every day period I’d figure out whom not to mess with and keep my distance. I’d learn who the leaders were.

We see a lot of the football side of his life, but there’s little about individual plays and more about the decisions he made, and his life as a football player. For instance he describes a distinct difference between college and pro ball, which he characterizes as a shift from being in a brotherhood to having professional colleagues. There’s some detail of individual plays, particularly one game with the Patriots involving the strategic effect of an ineligible receiver downfield (I’m lost here, but this might mean something to someone reading), and a few instances of the expected grit of playing football. Like noticing he was walking funny, and discovering he’d ripped a callus off the ball of his foot – so he shoved it back on and kept playing.

I had to laugh at Urschel’s remedy for post-game pain:

On the plane back to Baltimore, I passed out from exhaustion.…My body had never felt so beat up. My hand was throbbing where a nose tackle had to stepped on it; my knee creaked when I bent it; my head had a dull ache. But when I lay in bed, I was too wired from the game – not to mention all the caffeine, equivalent to 10 cups of coffee, that I had taken right before the game period so I got up, found a pen and a clean piece of paper and focused on an unproved conjecture. Immediately, I felt myself calm down.

We go through the revelation of the Penn State sexual abuse scandal with him. Sandwiched between multiple declarations of “abuse is way worse than any football team penalty, and the kids suffered more than any of us ever will” is a somewhat bewildered position: this happened years go, why is it affecting us? Those of us who read a lot of racial justice material usually hear this in the form of “I never had slaves, why should I be penalized?” The answer is the advantage one group makes for itself at the expense of another. Urschel himself becomes the front-and-center icon of “We don’t just care about football, we have scholars too”, but no other player is mentioned as serving PR in this way; so my question is, was he the only one who could present such a narrative? And isn’t that a statement, too?

He also takes us through his decision to retire from professional football. Because I follow a lot of mathematicians on Twitter, I remember this: his announcement immediately followed the New York Times article describing a frightening study of brain trauma in football players. But Urschel explains he retired because, when it came time to go back to football, he simply wanted to stay at MIT and continue his math work. As surprising as it may seem to the rest of us, math, like football, is a youngster’s game (I heard that from one of my math mooc profs a few years ago, too). He’d already had one serious concussion, an injury that took months for full recovery, and he was aware of the risks. He also knew the study that got so much attention had a problem with selection bias (another term I’m familiar with, in a primitive way, from another mooc), a point made by the researcher herself and included in the NYT article. So the timing was a coincidence.

This book wasn’t originally on my reading list for this year. I added it to the category of “writing about work” because I kept seeing it. I follow several mathematicians on Twitter – fallout from all those moocs – and just as Penn State held Urschel up as a sign that football players can be scholars, mathematicians hold him up as a sign that mathematicians can do cool things like play football. Jordan Ellenberg interviewed him for Hmmm. Ben Orlin got a great blurb from him on his first book, Math With Bad Drawings. And just as I finished this book and started notes for this post, Mike Lawler posted about the credit-bearing online Calculus course on outlier.org that Urschel is teaching; if I had $400 sitting around I’d take it for sure. If stuff like this had been around when I was in school, who knows, maybe things would’ve been a little different for me.

It’s an interesting and fun read. This is the book I should’ve read when I was moving, rather than poetic analysis.

2 responses to “John Urschel and Louisa Thomas, Mind and Matter: A Life in Math and Football (Penguin, 2019)”