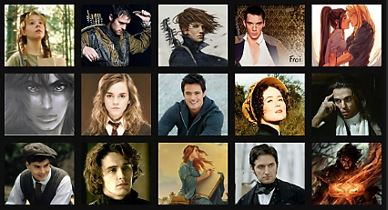 The first one I saw was a tiger with golden stripes—shiny gold, like metal—breathing fire in my front yard, scorching the hell out of my Bermuda grass. I still don’t know where that thing came from, maybe a folk tale or a kid’s cartoon. All I know is it scared the bejeezus out of me. I hunkered down in my house for days afterward, watching the news. At first, no one could figure out where all these strange creations were coming from. Then they started finding famous ones, like Tarzan and Tom Thumb, until finally a government spokesman came on and told us that centuries of creating characters had caused a crisis. The world of imagination was overpopulated and overflowing.

Initially, I thought this story, while very much on the right track, just missed the mark. I was comparing it to a couple of other works: Joyce Carol Oates’ wonderful story “EDickinsonRepliluxe” in which android versions of various historical figures are made available to consumers, and the more on-point novel Sophie’s World by Jostein Gaarder, a Norwegian YA book written to teach philosophy to his teenage daughter.

However, those comparisons are not really appropriate, as Barrett’s story focuses on a different aspect, something that wasn’t clear to me until I read Jake Weber’s post explicitly discussing authorial intent and reader interpretation, an interesting and worthwhile examination of one of my favorite topics, in light of this story. And again, I wish I’d thought of that.

But I didn’t, so I’ll stay in my lane. While Gaarder’s character Sophie is presented as having independent will and curiosity once she begins to investigate the world philosophically, Barrett’s characters remain as created, despite Carl’s attempts to educate them. Thus the conflict is much different.

The displaced characters had to live somewhere, and the government thought it would give the economy a boost to pay people to board them in their homes. For years I’d been scraping by on disability checks, so in spite of that bad brush with the tiger, I decided to apply to the program. Some people got lucky. Imagine having Winnie-the-Pooh living in your house! Or Cinderella! I got Mary. She was a simple advertising character, but she turned out to be better than any fairy tale princess around.
They dropped her off on a chilly morning. She must have been freezing, because with my bad leg it took me a long minute to walk to the door. There was an icy sort of rain falling, like frozen sand, and it glistened all over her coat and blonde hair. “I’m Mary,” she said, “the bridal detective.”

Predictably, Carl falls in love with Mary, an unsatisfying relationship since she is not a complete person but a one-dimensional advertising projection whose only concern is finding the best bridal deals. She is literally, and ironically, “always a bridal detective, never a bride”.

When Carl takes in Tommy Lee, a TV character, there’s a similar inability to expand the character-as-created: Tommy Lee is from an old-time Western family drama, and he expects, at the end of each day (episode), to be taught a lesson by Carl (his ersatz father), because, for those of you who never saw The Waltons or Ozzie and Harriet, or even the early years of The Mary Tyler Moore Show, that’s how television series were written at one point: the character learns a life lesson in the final act, but never really changes, or the series would be over. Fortunately, TV started to evolve in the 70s, storylines started stretching over several weeks or even seasons, and characters did change over time.

Tommy Lee never got to that point, however; he falls in love with Mary, and though every night Carl explains to him that she’s not right for him, the next day he goes back to planning to marry her.

The story gets connected to the present day by the gradual change in societal attitudes towards the imaginative characters that have shown up. While at first they were welcomed and taken in to private homes by eager families, as time goes on they are viewed as a threat. A nearly-worldwide ban on imagination prevents the creation of new characters, except in a few “rogue states”, and the general public becomes more and more angry at the newcomers, eventually demanding they be put into labor camps. Somehow there’s an underground dedicated to returning the characters to their original habitat:

Vanity repatriation, they call it. There is a black market for writers who want to return their characters to the world of imagination….
The experts say that when these characters are in the world of imagination, they can’t see our world at all. But maybe when Mary goes home, she’ll know it was me who freed her. She’ll know it was me who loved her.

And again, we have a story where the exact details of how all this works aren’t clear, and don’t need to be clear. How does this repatriation work? I have no idea, but does it matter? The point is, Carl realizes he can’t have Mary, so he does the next best thing by making sure she’s as happy as possible, rather than surrendering her to a labor camp. Isn’t that the essence of love?

By resisting the urge to imbue the imaginary characters with the possibility for change, Barrett creates a nice tension between Carl, an actual person with a will, and his two boarders. Carl shows the capacity to “read the room” and adjust to reality, while Mary and Tommy Lee are stuck in their worldview, unable to change or adapt. We may not like a character, but we’re stuck with what we see on the page.

And here’s where Jake’s take on authorial intent and reader interpretation comes into play. We can imagine we see a man in the moon, or the hunter Orion in the stars, but we can’t make them be what we imagine them to be; they are still a big rock and a random arrangement of lights. Is it the task of an author to create a character that can only be interpreted in the way the writer intends? Or are characters who allow multiple interpretations far more interesting? Is that why Hamlet would be so much more fun to live with (or more harrowing, perhaps) than Mary?

One response to “Pushcart XLIII: Eli Barrett, “The Imagination Resettlement Program” from Pleiades #37.2”