This is a book about math. That was the plan, anyway.
Somewhere, it took an unexpected left turn. Before long, I found myself without cell phone reception, navigating a series of underground tunnels. When I emerged into the light, the book was still about math, but it was about lots of other things, too: Why people buy lottery tickets. How a children’s book author swung a Swedish election. What defines a “Gothic” novel. Whether building a giant spherical space station was really the wisest move for Darth Vader and the Empire.
That’s math for you. it connects far-flung corners of life, like a secret system of Mario tubes.
Ben Orlin, Introduction, Math With Bad Drawings: Illuminating the Ideas that Shape our Reality

As a lifelong mathphobe, I rarely buy math books; no matter how highly recommended they are, I get stuck in the pages of formulas, equations, and sample problems that require translating, much as a text in an unknown language requires, resulting in a Google-translate version of the math. I neither learn nor enjoy it. But I’ve been following Ben’s blog for about five years now, so I knew I was going to buy this book, I knew I’d enjoy it – AND I knew I’d learn something.

To be sure, I had a couple of concerns. First, I thought it might be what the Tumblr-turned-book market cranks out, merely a “greatest hits” reprint of his blog. Nope; all the material in the book is brand-new, though he references his blog a few times. And by new, I mean new: I’ve seen many explanations of the triangle inequality theorem that turned into the Charlie Brown Teacher wah-wah but I will remember Ben’s triangle struggling to bring its arms together and falling… short.

My second concern was that, while starting out as a “fun math for everyone” book, it would soon turn into formulas and equations. Let’s face it, most math books (even “friendly” math books that start out with lots of reassurance that “anyone can learn math”) read like rule books: “The ball shall be a sphere formed by yarn wound around a small

core of cork, rubber or similar material, covered with two strips of white horsehide or cowhide, tightly stitched together. It shall weigh not less than five nor more than 5¼ ounces avoirdupois and measure not less than nine nor more than 9¼ inches in circumference.” But again, my faith in Ben was rewarded: This book is more like the 7-year-old next door tossing a ball in the air and calling out, “Hey, wanna come play?” The only things that resemble math-book formulas are a couple of endnotes that are pre-declared to be esoteric. Oh, there is a bit about methods of calculating certain baseball and football stats, but even that is presented in a non-scary way (at least as far as the math is concerned; the sports stuff is still lingo, but I suspect most will consider that a plus rather than a minus).

The first thing that struck me about the book, before I’d read anything, was the high quality of the physical object. The dust jacket is appealing and representative, including some of Ben’s “bad drawings”, also reproduced on the endpapers and flyleaves. My practice is to remove and put aside dust jackets while I’m actively reading a book, lest it get torn or dirty (I’m super-destructive, I am I am), and recover the book when I’ve completed the first read and shelve it. I was surprised, and pleased, to see one reproduced drawing on the cover of the book itself, a nice detail. The book felt heavy, and I soon realized that’s not just because it’s a 400 page book, but because the pages are of unusually thick paper, presumably to prevent bleed-through of the many color drawings on nearly every page. In fact, I had to learn how to turn pages all over, the feel was so different.

And color! On every page, color! The Bad Drawings are all in color, sometimes monochrome but often a mixture. Even the running titles (vertically set!) and colored boxes enclosing page numbers are in colors that match the topic (red is probability, purple is statistics). I’ve become more appreciative of books as physical objects as I’ve encountered more truly well-produced books; this one keeps the bar high.

But what about content? No problem. You can find an excerpt at Popular Science, and another at Vox; I find these difficult to read online, and like the book layout far better, but then I’m an old fart. And by the way, you can find a bunch of reviews, interviews, and other goodies on Ben’s blog, if you want more.

The opening division – How to Think Like a Mathematician – presents the playful, investigative approach to math: “Creativity born from restraint.” That tickled me, because it’s in many respects the basis of poetry with its forms of meter and rhyme, not to mention Oulipo, who delight in such things as writing entire books without the letter “e”. And the Ultimate Tic Tac Toe is pretty cute.

I’d like you to meet this chapter’s star: the triangle.
It’s not your typical protagonist. Snooty literary types may dismiss it as two-dimensional. Yet this atypical hero will embark on a typical hero’s journey: rising from humble origins, learning to harness an inner strength, and ultimately serving the world in a time of crisis.
Chapter 6, We Built This City on Triangles

In the Geometry division, I was surprised by how captivating I found bridge trusses, and the reasons they are made with triangles instead of some other shape. The chapter on European paper sizes was maybe my favorite of the book; they make sense, like the metric system, unlike the American way of remembering how many ounces in a pound and feet in a mile and make it stop! The stories of brownies and the Colossus at Rhodes made scaling more understandable than memorizing formulae, and 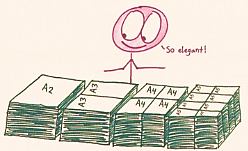 we even got into some biology with explanations of the differences between ant and elephant legs. I found the chapter on dice asked a question I’d never considered: why are dice typically shaped as cubes? I had encountered pig-shaped dice in a logic mooc, and I’ve seen a few non-cuboid novelty dice in my travels, but why are standard run-of-the-mill dice always cubes? Then there’s Chapter 10, An Oral History of the Death Star, told from the POV of various participants: the Imperial Geometer, Imperial Physicist, Imperial Engineer, and a few others in conversation with Grand Moff Tarkin and Darth Vader, trying to outline the difficulties involved in building the most advanced killing machine ever.

The Probability section included the hilarious chapter “10 People You Meet in Line for the Lottery”, as well as chapters on DNA (yes, more biology), and weird insurance and how companies determine what to charge for, say, multiple-birth insurance or Extraterrestrial Kidnapping Insurance. Some of this chapter gets into economics more than I’m comfortable with, since, despite how much I enjoyed the terrific Oxford mooc on economics, I still find anything to do with money to be boring as snot.

I admit that there is something reductive about the whole project of statistics, of taming the wild, unpredictable world into docile rows of numbers. That’s why it’s so important to approach all statistics with skepticism and caution. By nature, they compress reality. They amputate. They omit. They simplify.
And that, of course, is the precise source of their power.
….By condensing the world, statistics give us a chance to grasp it.
And they do more, too. Statistics classified, extrapolate, and predict, allowing us to build powerful models of reality. Yes, the whole process depends on simplification. And yes, simplification is lying by omission. But at its best, statistics are an honest kind of lying. The process calls upon all the virtues of human thought, from curiosity to compassion.
In that way, statistics are not so different from stick figures. Their bad drawings of reality, missing hands and noses, yet speaking a peculiar truth all their own.
IV: Statistics: The Find Art of Honest Lying

I had some troubles with the Statistics section, possibly because it’s the mathiest in the book, but that doesn’t mean there weren’t fun spots, such as the history of baseball statistics. Anyone who liked the movie Moneyball will find a similar storytelling approach that makes a niche subject interesting to the outsider. There’s also a chapter on corpus linguistics, the statistical analysis of language use and a particularly hot topic in literary circles these days. But I confess: I still don’t understand p-hacking beyond the most elementary level.

The final section – On the Cusp – is about the difference between what is continuous and what is discrete. The camel example reminds me of the sorites paradox, aka the Problem of the Heap (from another logic mooc), but I’m improvising wildly here; as a mathphobe, I don’t quite grasp the connection in this section as we veer from electoral math to measurement of coastlines (which is in itself another fascinating paradox from, you guessed it, another mooc). I’m sure those with greater in-depth understanding will see a discipline that’s lost on me. In any case, it’s all fun, and if there’s anything that can convince a mathphobe that math matters, it’s election math.

After I’d read the book – and I couldn’t believe I’d read a math book, cover to cover – I went back to connect the endnotes with the text to which they referred. I’m going to guess this was a “de-academicizing” decision, avoiding cluttering pages with footnotes, but I like to know when I read a text that hey, there’s more info about this in the back. So I spent a couple of hours flipping back and forth, making notes in the margins (I told you, I’m destructive). Sometimes it’s just a simple citation; sometimes it’s an expansion on the topic; and sometimes it’s a funny comment. Don’t skip the end notes. Ok, you can skip the citations (unless you want to look something up; I looked up Poe’s prose poem “Eureka” but TLDR’d it), but the rest are worth reading.

I’ve had a complicated relationship with math all my life. It wasn’t until about five years ago, thanks to a brilliant mooc on mathematical thinking, that I saw a different way to approach math, a more investigative, playful way that viewed mistakes as part of the game. It was in that course that I also was referred to Ben’s breakout essay, “What it 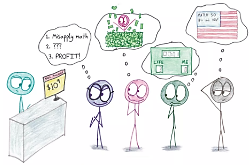 Feels Like to be Bad at Math”, and started following his blog. He’s always been patient with my stupidest questions, encouraging with my painfully slow progress, and generous with his time and talents.

I hope this book introduces him to a wider circle of mathphobes (and those of us slowly recovering from same); there are lots of us out there, and we all could benefit from seeing the fun side of math.

2 responses to “The Math Book even a Mathphobe Can Love: Ben Orlin’s Math with Bad Drawings”