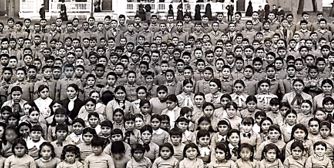 They found him while laying the groundwork for a fast food restaurant. She forgot the name as soon as the officer said it – not McDonald’s, not Wendy’s. No, it was something new, something flashy and fleeting. Whatever it was, the thought made her sick. She couldn’t shake the image of a child’s tooth being pounded into beef patties, or tiny brown limbs being thrown into an industrial-size grinder. Sour fluids burned their way up her esophagus. She started to gag.
“Are you alright, ma’am?” the officer asked.
Henry’s makeshift grave was on the grounds of the old residential school. Of course it was. Of course. What was that famous Sir John A. MacDonald quote? Kill the Indian, save the man? Turned out killing the Indian saved no one. It just killed Indians.

Now I see why Jake was so determined to publish his post about this story on Columbus Day. By the way, my city is one of the increasing number of cities and states that have ceased that designation and now call the second Monday in October Indigenous Peoples Day.

The story starts and ends with food: from fast-food hamburgers to traditional Indian cornmeal mush. Elliott’s Contributor Note tells us the driving force behind the story was the idea of consumption. It’s a great comparison as Beth, a Mohawk woman, remembers her brother being removed from her home at age 5 and never returning. She herself was also removed and sent to the same residential school, but she was adopted out to a white family. By some measures, she is a success story: she had a good career as a nurse, married and had children of her own. The vacant spot in her soul only comes back to haunt her when her brother’s bones are discovered during construction.

This stealing of Indian children is something that was prevalent not only in Canada, where the story is set, but also in Australia and, yes, the US. My library will be screening the documentary film Dawnland next week, describing the process of forming the first US Truth and Reconciliation Commission. Included is the comment that the public is “largely unaware” of what happened.

The story’s climax occurs when Beth returns to her reservation, buying ingredients for the cornmeal mush. A sales clerk addresses her as Istha; Beth recognizes it as a familiar Mohawk word, but needs to be reminded of its meaning: Auntie.

Even though she’d had her hair cut and her tongue tamed, even though she’d donned pantsuits and pearls and spoke English as well as either queen she was named for, even though she let people think she was Portuguese or Italian or Greek, even though she’d left the scarred memories of her childhood in a dark, unattended corner of her mind – her people still recognized her. It was like they’d been there, waiting, all this time.

I was struck by the salesclerk’s enrollment in a Mohawk language immersion program, a hopeful sign in that it signals a new interest in preserving the language, and a tragic indication that the language is no longer spoken enough for children to learn it naturally.

I found another aspect of Elliott’s Contributor Note of great significance:

As soon as I realized Beth and her family were Mohawk, it was like the story opened up. Everything came fast. Everything made sense. What didn’t make sense – what was painful to ask myself – was why I was writing all my characters as white before this. It’s important to recognize the ways that whiteness works its way into our imaginations as Indigenous writers, the way it forces us to diminish our own people, our own stories, and elevate either whiteness itself, or a version of Indigeneity that pleases white audiences. This story helped me realize that my writing didn’t have to do either of those things. My writing could center Indigenous people, voices, and experiences instead.
~~ Alicia Elliott, Contributor Note

I’ve read this before from writers of color; they either felt they could not write their own stories, their own characters, because it just wasn’t done, or the only stories available to them, particularly as children, featured white characters and thus were all they had to use as models. I think – I hope – this is changing, as books featuring all kinds of people are now being published, and stories from many voices can be heard.