This is a survey of the main trends in twentieth-century literary theory. Lectures will provide background for the readings and explicate them where appropriate, while attempting to develop a coherent overall context that incorporates philosophical and social perspectives on the recurrent questions: what is literature, how is it produced, how can it be understood, and what is its purpose?

So here I was, at the end of my reading list and the extra reading list I patched on at the end, and I still had a few weeks to go until BASS 2018 dropped. Inspired by the Milton OCW I’d just finished, I thought it might be fun to play around with literary theory for a while. And it was – this is a really nice set of lectures.

I took a class similar to this one in college, but of course that was a very long time ago. I tracked down the textbook through my library, a thousand-page-in-tiny-print-on-onionskin compilation of Profound Thoughts from creation to last week (I had a book very much like this in college, too). Alas, I confess, I did very little of the reading. I’m not 20 years old any more (not that I was 20 years old in college, either; it took me a while to get there), after all.

The sequence was mostly chronological, apart from a little overview at the beginning. I liked the explicit labelling of the various phases, from language-based theories of New Criticism, Russian formalism, and the truly scary triplets Saussure, Levi-Strauss, and Derrida (I toyed with linguistics in college), to psychologically-based theories including Freud and Lacan, to cultural systems of post-modernism and the identity-based critics of the contemporary Academie.

I also very much liked the clever twist of including Tony the Tow Truck as the exemplar text evaluated across the systems. If you’re wondering how you missed this work of literary

genius, well, it’s probably because you don’t have little kids. Tony the Tow Truck is a picture book for toddlers, clocking in at about 188 words total. In keeping with Russian formalism, Prof. Fry parsed it linguistically (the repeated “t” sounds common in folklore), psychologically (the narcissism of the repeated “I” sentences and the return to an earlier, safer state), socially (the snooty cars that won’t help Tony, and the friend that will), and in terms of identity and community (relationships). It’s kind of amazing. I wrote papers like this. I always thought it was sophistry.

It wasn’t my goal to come away with working knowledge of all the schools and theories; I just don’t have that kind of brain power any more. But I run into these things from time to time, and it’s nice to have it all in one place, where I can refer to it from time to time. I really like these lectures; they come with nicely edited transcripts. 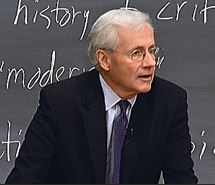 Of course, there are no tests or quizzes, and it’s purely a solo effort with no other students. I’ve tried to get others interested, but no one wants to play.

As luck would have it, right after I started, a bunch of moocs opened up, and I ended up with more books to read (I’m on a math kick at the moment). I’m glad I managed to keep going with this; it might even turn out to be useful in some way on future readings, now that I’ve been reminded of certain salient points of literary criticism.