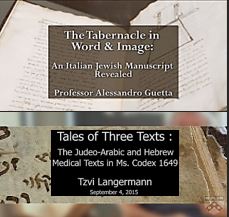 1) This mini-course introduces the use of early modern manuscripts for intellectual history—that is, the history of how ideas and the communication of those ideas changes over time…. explore this manuscript, its editions, and how it opens a window into Italian Jewish intellectual life only possible by attention to the physical manuscript
2) This mini-course is a general introduction to both to medieval medicine and to the value of using manuscripts…. [Professor Y. Tzvi Langermann] will not only walk the student through the basics of medical knowledge training and practice in the Jewish Middle Ages and beyond, but he will also show how clues gleaned from the particular elements of a manuscript (such as marginal notes, mistakes, and handwriting) allow us to learn a great deal that we could not have gleaned from a pristine printed version.
(both) No previous knowledge of Jewish history, intellectual history, or manuscript studies is required.

Short version: a terrific pair of lectures for anyone interested in what historians can learn from manuscripts, or medieval Jewish history, science, and culture.

These two mini-moocs aren’t so much courses as they are highly focused single lectures, a little over an hour each, on specific documents and how they reveal not just the content of the documents, but the history and norms of the time. That may sound a bit abstract, but the details explored are fascinating: everything from the interrelations of various cultures in the late medieval period, to linguistic differences, to attitudes towards religious practice.

The first mooc examines a pair of manuscripts describing the Second Temple in Jerusalem, and the Tabernacle (a temporary and portable version used before the Temple was built, particularly during the forty years the Hebrews wandered around the Sinai). The second mooc looks at a codex with three different manuscripts on medieval medical practices, and uses these as a way to trace the flow of ideas from Galen to the Islamicate to Europe.

Now, granted, these aren’t “oooh, pretty” manuscripts, the illuminated gospels and breviaries lettered in precise calligraphy. These manuscripts are far more about content than style. But, when examined and described by those who know what to look for, they turn out to be just as interesting as those with artistic flourishes.

Both professors are historians – one of intellectual history, one of medicine – so the focus was on what the manuscripts can tell us about those areas. It isn’t a matter of “in this year so-and-so did this” but a more general history, both in terms of time and scope. For example, as the Talmud had been banned in Italy and bootleg fragments were only intermittently available, different excerpts were added to various versions of the Temple manuscript. While the medical texts list drugs, they do so in Arabic and Hebrew, so marginal notes and

end-page glossaries include local dialect vocabularies for practitioners who need to buy these substances from Italian vendors.

One of my favorite segments explored the purpose of documenting the physical appearance of the Temple. The work was an attempt to synthesize a variety of sources into a single description. But why? Prof. Guetta offers three possible factors: the development of “a historical mentality”; a growing awareness of dimensional perspective due to the constant exposure to flourishing Italian architecture of the period, and a reevaluation of the textual description of the Temple in light of that development; or a religious motivation, coming primarily from a specific Protestant group that was more interested in the accurate reconstruction of the Temple as a way to bring about the Second Coming.

I also have to give al-Majusi, a Persian physician, the Bad Timing Award: his comprehensive and beautifully organized medical text, part of the Codex, was considered the ultimate authority, until the

renowned physician/philosopher Avicenna came along and wrote an even better text, overshadowing Majusi’s work and pushing him into relative historic obscurity.

These mini-moocs are listed as an advanced course based on predicted audience, but that shouldn’t intimidate anyone who’s interested; the material is very accessible, and all technical and cultural concepts are explained. The medical course is archived at the moment, so the forums are inactive, but all the other material is available. Both lectures are great; the Tabernacle course is slightly more polished, with an artistic lead-in to the videos and varying camera angles, but that’s pretty minor. The lectures are well-organized into specific topics, and images of

pertinent sections of the manuscript are embedded in the videos. Links to the complete digitized manuscripts from the Penn collection are hard to find, but they’re there (check the Syllabus).

Grading is based on a few multiple choice questions following each part of the lecture, plus a final covering the basics. Although the forums are inactive for the medical course, the Tabernacle course TA is very helpful and promptly replied to questions and comments. The forums are not terribly active; I’m guessing enrollment is sparse, partly because it’s a niche humanities course in a world obsessed with vocational training, and partly because it wasn’t well-publicized. I stumbled across it by happy accident, in fact.

I almost missed these offerings entirely. edX hasn’t publicized the current Tabernacle course at all (I saw it on a tweet by Class Central), and it was only through the Syllabus that I learned about the Jewish Medicine course. That’s a shame, since they’re terrific. I’ve been a bit of a snob about mini-moocs (I’ve called them “Youtube plus a quiz”) but I have to re-think that. For anyone interested in Jewish cultural history, medieval medicine, or manuscript studies, these are tiny little gems.

One response to “Temple, Tabernacle and Medicine: a pair of medieval Jewish manuscript mini-moocs”