Course: Anatomy of the Chest, Abdomen, and Pelvis

Short version: These folks aren’t fooling around: if you want a detailed anatomy course without any frills, this is it. For me, it worked fine, but I think there are better options for anatomical novices.

I’d just completed the 16-week Anatomy series from Michigan when I signed up for this. I was hoping for more detail, and boy, did I get it. But there was a downside. This is not so much a mooc – that is, a cohesive course – as it is a collection of videos. Because

I spend a lot of time thinking about literature, I started thinking about narrative. This is what happens when a course lacks narrative. It isn’t necessarily deal-breaker – the information is there and, drawing upon experience and using other techniques to stay oriented and motivated, it’s workable – but it certainly is a less pleasant, less engaging experience.

The course consisted of four weeks, each with one or two units: introduction/chest and lungs; mediastinum/heart; abdomen; pelvis and perineum male and female. In general, basic anatomical detail with stylized diagrams was presented first in each unit, followed by detailed cadaveric dissections, often with live clinical or testing procedures interspersed. However, there was little connective tissue, so to speak; no effort to tie anything together, or provide any kind of pathway; the result was some material felt incomplete until much later, and some felt duplicated several times. I can’t say I “enjoyed” the course, but I can say I improved my understanding of anatomy.

hours per week – would be a bit tight for anyone trying to learn the material. It would be possible to pass the course in that time frame; it’s possible to pass most Coursera courses these days without even taking the courses, because you have unlimited tries at the exams. But learning the material? Getting a good picture in your head of what’s posterior to what and how nerves and arteries branch off? Recognizing structures on dissections? I suspect, for most of us who aren’t in medical school, that takes longer. I entered a lot of material into Cerego, so that took a great deal of time, but it also helped with retention (and will continue to remind me for months to come), and I consider it time well spent.

The first unit was a review of various anatomical planes and, with the participation of a live model decorated with markings, identification of external landmarks of various organs. Since this was new to me, I spent a great deal of time on it (I started the course early so took more like six weeks than the official four, but these courses are all self-paced 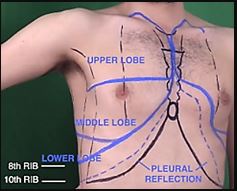 anyway and roll over into the next session without penalty if they aren’t completed by the end date). Several videos covered imaging techniques – x-ray, CT, MRI, and ultrasound – from a light overview of technical foundations to a guide to reading images. It’s kind of a kick to see an MRI on Grey’s Anatomy and know, “Oh, that’s with IV contrast, supine.” And it’s really fun to hear Dr. Bailey refer to the SMA or the IVC and know what that is.

Then came the actual anatomy. While I still have a lot of trouble telling a nerve from a vein from an artery from a tendon on cadaver dissections, in this case the dissection was videotaped rather than photographed, and often proceeded from skin to deepest structures. Several warnings were provided, advising us that “some people find these images disturbing” and requiring an acknowledgement

to continue. The chest would be incised, the skin peeled back, the muscles examined, explained, and reflected one by one, the bones sawed through and removed, and the deeper structures pointed out. This was a lot more helpful than an isolated labeled photograph of a dissection. Material also included endoscopic videos from bronchoscopy, upper and lower GI screening endoscopies, cystoscopy, and a laparoscopic gallbladder removal. And if you stick with it to the very end, you can see a penis dissected. Longitudinally, then transversely. I may never eat kielbasa again.

“Digital practical exams” followed each section (don’t worry, it’s not a prostate exam, it’s a kind of “click on the [phrenic nerve/ureter/psoas muscle]” thing off stills from the dissection or

procedure videos). I found these quite difficult. First, there’s my difficulty telling a preserved nerve from a vein from an artery from a tendon, and second, the clickable areas were sometimes oddly construed. There was a kind of logic to it once I figured out any given structure; I could relate everything else to it. These tests weren’t graded other than for completion.

Ungraded multiple choice questions ended several of the videos; these tended to show up on the graded unit exams later, along with additional questions. The questions were often difficult, as they involved putting visual concepts into words: what structure is medial to the carotid artery, what’s posterior to the hilum of the lung, how does the piriformis muscle relate to the superior gluteal nerve? This requires having a good mental image of the anatomy, in

order to translate it into verbal description. In general, I’d say the testing material was effective at reinforcing learning.

It was a cold class; the only people who appeared were in the first section on physical exam and external landmarks. Everything else was voice over image. I’m not sure if that was deliberate, or just convenient. One of the post-course survey questions was on course engagement, and I gave it a 0. Anatomy engages me; the course did not. I’ve read textbooks that were more communicative. But I’m not complaining; I was here for anatomy, after all. However, I’ve taken Duke’s neuroscience course, which was every bit as detailed and intense, and they managed to maintain a high degree of engagement and even community, so it can be done; it just requires attention to narrative.