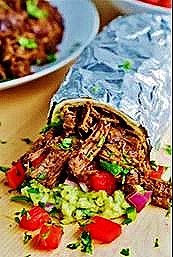 He lived in a world of grease, and no matter how often he bathed, which was once a day, rigorously—and no shower but a drawn bath—he smelled of carnitas, machaca, and the chopped white onion and soapy cilantro he folded each morning into his pico de gallo. The grease itself was worked up under his nails and into the folds of his skin, folds that hung looser and penetrated deeper now that he was no longer young….
And so it began: first, then the lunch rush, furious work in the hot, cramped kitchen, and all he could see was people’s mouths opening and closing and the great wads of beans and rice and marinated pork, chicken, and beef swelling their throats.

Stories, at least those using traditional narrative form, tend to start in the middle, the in media res technique hammered home by Creative Writing 101. Personally, I think it’s a tossup as to whether readers prefer it, or whether it’s simply that editors prefer it because they can more quickly decide whether or not to move on to the next of the thousand stories in the slush pile. Too gimmicky an opening line is cringe-inducing, but one that arouses curiosity about just what’s going on is the golden ticket.

This story starts not with events, but with an atmosphere, a characterization/setting so palpable you might have an impulse to wipe off your hands or dab at your mouth with a napkin. Nothing special is happening – at least, not for two pages, unless you count the waitress being late – but we know this guy by the time we’ve gone through those two pages. He’s tired. He’s depressed. He’s discouraged. He speaks with “a voice that was dying in his throat a little more each day as he groped toward old age.”

We really want something to happen for this guy. And, of course, it does.

When he saw the face in the tortilla that provided the foundation for the burrito he was just then constructing, he ignored it. It was nobody’s face, eyes, nose, cheek bones, brow, and it meant nothing except that he was exhausted, already exhausted, and he still had six and a half hours to go. And sure, he’d seen faces before – Mohammed, Buddha, Sandy Koufax once, but Jesus? Never. The woman over on Broadway had seen Jesus, exactly as he was in the shroud of Turin, only the shroud in this case was made of unleavened flour, lard, and water. He could have used Jesus himself, because that woman got rich and the lines for her place went around the whole city block. If only he had Jesus, he could hire somebody more competent – and dependable – than Sepideh and sit back and take a load off. That was what he was thinking as he smeared refritos over the face of the tortilla and piled up rice and meat and guacamole and crema, cheese, shredded lettuce, pico de gallo, the works – and why not? – for yet another pair of footballers who were sitting there at the back table like statues come to life. Call it whimsy, or maybe revenge, but he mounted the ingredients up till the burrito was as big as a stuffed pillowcase. Let them complain about this one.
That was when he had his moment of inspiration, divine or otherwise. He would weigh it. Actually weigh it, and that would be his ammunition and his pride, too, the biggest burrito in town. If he didn’t have Jesus, at least he would have that.

It’s a paragraph that’s a lot of fun to read, but the elements also seem carefully chosen to me. The face in the tortilla doesn’t impress him. Is that because he’s a fact-based guy with little use for faith, or because all the romance and imagination and inspiration and hope have drained out of him down the grease trap? Any element of the supernatural is converted to practical benefits reaped by the woman over on Broadway. He just goes about his job, a little pissed off, and makes a super-huge burrito… in revenge? Sure, he’s sick of burritos – having seen them through his eyes for a few minutes, I’m pretty disgusted by them myself – but I doubt the college footballer who ordered it would think a five-pound burrito was a bad thing. And then inspiration finally arrives in the form of a marketing plan rather than the face of Jesus.

And we still don’t know his name.

Then the story gives us some white space, and restarts on a completely different note:

We each live our days in accumulation of milliseconds, seconds, minutes, hours, days, months, and years, and life is a half we must follow, invariably, until the end. Is there change, or hope of it? Yes, but change is wearing and bad for the nerves and almost always for the worse. So it was with Sal, the American-born son of Mexican immigrants who opened Salvador’s Café with a loan from his uncle James when he was still in his twenties, and now, nearly forty years later, saw his business take off like a rocket on the fuel of the five-Pound burrito.

This reads so much like a typical opening paragraph, I have to wonder if it was originally written that way. Maybe it was moved, maybe the prelude was added; in any case, I think it was a great move. I know so much more about Sal from smelling the onions, and now I’m curious about how he ended up where he is, so this doesn’t seem like exposition at all but fine touches on an almost-finished portrait. As well, something about this reminds me of a novel with a short introductory vignette followed by grounding material. I’ve often read longish stories that felt like novel excerpts, but it’s unusual to read a shortish story that feels like a novel – not a story that needs to be fleshed out as a novel, but as a complete work, just reduced in size. Even the language is expansive and full, rather than streamlined or minimal.

And if it seems like these large quotes, such a detailed discussion of the first four pages of a nine-page story would be a spoiler, trust me, it isn’t. If the first half was packed, the second half is more so: a five-pound burrito in a bite-sized form.

I don’t know much about the technical aspects of magical realism other than it pervades much of late 20th century Latin American literature. The most important thing I gather from poking around is that it involves something extraordinary among the plebian. That fits. There’s nothing more plebian than Sal. And as for the extraordinary… I’ll leave that for the reader to discover.

I could imagine any of several shapes for the second half of the story, and sure enough, it followed one of them with a few surprises along the way. Again, the elements seem carefully chosen, tailored to fit. I know I’ve been somewhat harsh on TC Boyle’s stories in the past, and I have to wonder if I should take another look at some of them, because not only was this one great fun to read, it was also effectively executed.

But it’s going to be a long time before I eat another burrito.