This course was originally developed as a way to teach science to non-science majors at Harvard University…. As a way to do this we’re now going to use food as a way to explain the underlying scientific principles that are all around us when we interact with food, or we eat, or go to a restaurant and so on.
We’re going to do this not only in the context of recipes that you cook in your very own kitchen, you’re also going to be watching amazing dishes being created by world-famous chefs, and you’re going to learn to understand the underlying scientific principles. And sometimes they work, but not always, but we’ll understand both when they work, and when they don’t work, from the scientific principles behind them. And as a way to cap all of this off we will then send you into your kitchen where you will do your own experiments; you’ll take measurements and make observations, and you will then get to eat your lab.

Three years ago, this course was impossible for me. The math scared me, the science was bewildering, and I had no idea what I was doing, mooc-wise. My specific goal for taking it again was to see if I’d made any progress at all. I’m relieved to report: I have! It was a lot easier this time around. Whew! 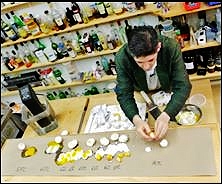 Grading is based on three components: weekly homework (they’re quizzes, no matter what they’re called), weekly labs, and a final project. I only did the homework. This was partly because that’s all I was interested in for my comparison, and partly because I didn’t want to make extra purchases. Nothing serious, mostly routine things most people have in their homes, like sugar and eggs, but there were a few things I don’t have, like a kitchen scale and a reliable thermometer. I 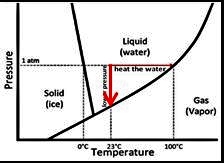 did some of the labs the first time around, and they’re quite useful for anyone practicing for future lab science courses, as they require record keeping and hypothesizing. And they’re fun, or what most people would see as more fun than calculating moles and temperature diffusion. Because of the grade structuring, it’s possible to completely skip the traditional problem-solving homework and just do the practical aspects, and still pass the course.

I found the first week – moles, pH, a touch of stoichiometry – to be the most difficult. The equations for heat diffusion and transfer were extremely simplified, so were pretty much plug-ins. Phase transitions, which gave me so much trouble last time, turned out to be quite easy, mostly because of the work I’d done in Mike Brown’s Solar System mooc. Each unit had conceptual questions, usually as ungraded “practice” problems; these were understandable either from cooking experience, or from a bit of reason based on the lectures.

Ungraded review materials offer extra practice in math and the very basic levels of science: density, concentrations and so on. Last time, I found these oppressive and this time they were a snap (though they are still very casual about rounding and significant figures). Personally, I’d rather use my own stash of materials collected from Youtubers over the past several years, and Khan Academy is great for isolated subjects, but it’s all there for anyone who wants it. There’s also a section of advanced materials more in line with traditional science courses – mostly readings, with ungraded problems –for those who want to better understand the equations (and it’s possible some of the earlier material has been moved there), so there’s a broad range of appeal for students from various mathematical and scientific comfort levels.

And of course there’s the fun stuff: watching serious professional chefs do their thing. Ferran Adria talks spherification. Joan Roca evaporates lemon peel into a cloud; Dave Arnold demonstrates how a degree or two can change the texture of an egg; Joann Chang spins sugar for croquembouche; Enri Rovira makes his famous chocolate eggs. Most of this material is available 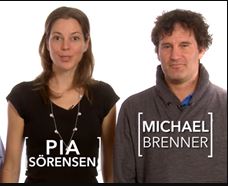 on Youtube in one form or another; every once in a while I pull up a tape and watch something amazing (and I see Top Chef‘s Voltaggio brothers are now in the mix).

Add to that two of the most likeable professors I’ve encountered on mooc videos (be aware they have nothing to do with the course at this point; after so many iterations, it’s run by TAs). There’s a reason this has been running over and over as long as it has: it’s fun!

One response to “Science & Cooking MOOC: What a difference 3 years and 80+ moocs make”