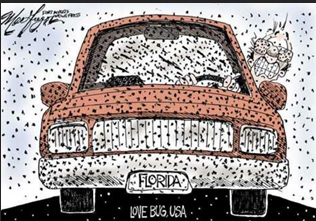 The day after his forty-eighth birthday was the same day Theo Bitner’s seventy-five-year-old mother friended him on Facebook. It was also the same day his wife told him he needed to see a doctor. Or a therapist. “It’s your mood,” she said. “It sucks.” Counting his mother, Theo now had eight Facebook friends. Sherrill, his wife, had 609. …
The estrogen levels at the house, a smallish Tuscan number in an uninspired neighborhood south of St. Augustine, were through the roof, in Theo’s opinion. With his daughter Ashley, unemployed and fresh from FSU with a degree in Women’s Studies (what the hell?), ensconced back in her childhood bedroom, with his mother Bette now living in the spare room he’d once fancied his office (the “bonus room,” Sherrill called it), and with Sherrill herself generally holding court over the rest of the house, Theo had begun to feel increasingly scuttled, shunted, reduced. There was a conspiracy, he reckoned. He didn’t like it.

Seems to me there’s some kind of agreement among males of the species, perhaps a Rule in a mental imprint laid down as neurons develop connections in the womb: “If there’s something wrong with your life, blame a woman.” Granted, the same thing can be said of women, who sing the “my man done me wrong” song way too many times. For that matter, we’re all looking to blame someone else, anyone else, as long as we never feel like our failures belong to us. So let’s all grow up: you picked ’em, you either live with ’em, or you get out, but in any case, take responsibility for your own damn failures.

But Theo isn’t quite there yet. He doesn’t want out, he just wants a little vacation. And that’s what this “story” is about. Yes, the quotation marks are snide commentary: to me, this is more a string of clichés than a story: a mid-life crisis, a lost phone cutting ties, threatening thunderclouds, a love-bug smashed on the windshield. I grew up in Florida; love bugs are a real thing, and they do make a horrible mess. And, by the way, they stay, ahem, connected, long past doing the deed, and often fly through the air as a matched set, which is why they’re called love bugs. What’s unusual here is that there’s only one on his windshield; typically they arrive in swarms, covering the windshield, headlights, hood, grill, you name it. I suppose that’s meaningful. It’s a special love bug.

Then we have the title: yes, marriage is unsafe at any speed. So is life, for that matter. Running away from home after your fantasy, definitely.

The only surprise is that his dream car isn’t red, but white.

As I’ve been commenting through this volume, my reading partner Jake (Hi, Jake!) has noticed I don’t often call out stories, or indicate I don’t “like” them. Part of that is just that I’m not really looking for “like” but to understand what the writer is doing, and part is that I’ve felt bad in the past when I’ve dissed a story. But we’re almost to the end of the anthology now, so it’s high time for a rant. I’m sure I’ll feel terrible about this in a few days (I’m sorry in advance, Ms. Smith) and I’ll feel stupid once I find out there’s a brilliant use of symbolism or reversed metaphors or some such thing. So be it.

The story is so clichéd, I’m going to quote a spoiler paragraph, so be forewarned. However, the spoiler doesn’t spoil anything. It’s exactly what you’d predict might happen from the estrogen crack on.

Theo felt a coolness runs through his veins, and he processed the implications of the current situation. So far today, he’d initiated (though admittedly not yet executed) an unapproved expenditure of $5000 from the joint checking account he shared with Sherrill; he’d very likely lost his biggest commission of the month, if not his entire job, by blowing off the sales call with Kelso; and he’d committed tawdry and outrageously athletic adultery with a woman half his age. And now, it seemed, he also aided and abetted a confessed embezzler. He watched the road. He felt in his pocket again for his phone. He gripped the steering wheel until his knuckles turned white.

I’ve see some internet comments about what a fun read this is. I’m all about fun, honest I am, but I guess I’m just not on that wavelength. And there’s this: New England Review is a serious literary journal with an impossible acceptance rate, and ranks 21st on Cliff Garstang’s Pushcart list. It’s not given to publishing fluff. So someone tell me what I’m missing.