(Part 1) This is an introduction to formal logic and how it is applied in computer science, electronic engineering, linguistics and philosophy. You will learn propositional logic—its language, interpretations and proofs, and apply it to solve problems in a wide range of disciplines…..you will learn how to use the core tools in logic: the idea of a formal language, which gives us a way to talk about logical structure; and we’ll introduce and explain the central logical concepts such as consistency and validity; models; and proofs.

(Part 2) This subject follows from Logic: Language and Information 1, to cover core techniques in first order predicate logic: the idea of formal languages with quantifiers, which gives us a way to talk about more logical structure than in propositional logic; and we will cover the central logical concepts such as consistency and validity; models; and proofs in predicate logic….We will also explore how these techniques connect with issues in linguistics, computer science, electronic engineering, mathematics, and philosophy.

I loved this course; along with the Solar System course, it became a focus of my winter/spring MOOC schedule.

I’ve taken a couple of other logic MOOCs: Mathematical Thinking, and the Stanford logic course intended for computer programmers. But this was the first logic course that included modules on linguistics and philosophy. I was very happy. Not that it was easy – in fact, the Peer Assessment assignments made me wonder if I had any idea at all of what was going on, and there were some moments when I was ready to hang myself from the nearest Proof Tree – but I loved every head-banging moment. 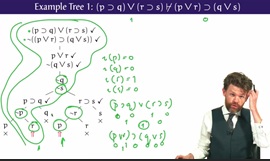 Part 1 included introduction to the basics of propositional logic and proof trees in two core modules, then offered a choice of four additional application areas, at least two of which were required. Of course, I headed for the more humanities-aimed subjects, and fell in love with implicatures and the maxims of Grice’s Cooperation Principle – and recognized how politicians and other liars depend on them – as well as the “fuzzy logic” and infinitely-valued logic covered in the Philosophy module. I did take a quick stab at the Programming module, but it became clear that it required more time than I was able to devote. I hope someday I can go back and pick up that and the Digital Systems module (I have fond memories of logic gates from my days of hanging out with… oh, never mind).

Part 2 expanded to first-order predicate logic, with some indication of what’s involved in higher-order logics. Here three core modules were required, along with three of five application areas: mathematics was added. I was very happy to see that. It gave me a chance to do more work on the concepts from Mathematical Thinking – bounds, convergence, that sort of thing. Then in Philosophy, I had a great time figuring out how to negate “The present King of France is bald”, and the Linguistics module turned pronouns into fine art.

Each lecture set in both core and applications was followed by a set of ungraded practice homework which in most cases included a variety of problems; unlimited attempts were allowed, so plenty of practice was available. Detailed notes in PDF form were provided for all the material. Each core and application module also included a final exam and/or a peer assessment assignment. I found some of the the Part 1 peer assessment assignments to be extremely difficult; in fact, I was pretty discouraged at the close of the class, since I’d felt I’d had a pretty good grasp on things and then came face-to-face with the realization that maybe I understood a portion and need to

broaden my conceptual grasp. I received extremely generously scores from my peers on the Part 1 assignments, by the way, as well as some great feedback. It’s important to know what you don’t know, so it was a worthwhile, if humbling, experience. The peer assessment assignment for the second course turned out to be too far over my head to even make a credible attempt, but at least it was optional, as it went beyond the material covered in class. The material for Part 2 was pretty humbling to begin with, particularly the philosophy module covering vagueness. Loving the material may be necessary, but is definitely not sufficient, for understanding.

The core material was covered by both instructors, but in the applications, they each took over what were presumably their personal specialties: Greg did Philosophy and Linguistics, and Jen handled computer applications and mathematics. I came to be extremely fond of both of them along the way. Now, I rarely mention instructors’ personal styles in these comments on MOOCs – first, it’s a good way to get myself into hot water, and second, it’s generally irrelevant to the educational experience. But in this case, although the courses were strictly business, each instructor brought a certain aura that added greatly to my enjoyment of the course – Greg with his vest and tie, a slightly Eleventh Doctor air about him, and his tendency to talk with his eyes shut, giving him an air of… bookish shyness? – the one exception being when he discovered in the middle of a proof tree that he’d actually worked out the example differently from what he’d started to explain. His laughter and slight fluster was completely charming; he should make little flubs more often. Then there’s his penchant for fitting wombats into examples.

Jen Davoren brought a completely different, but equally appealing, personna. I came to adore her constantly changing hair colors (seriously, check out her faculty page), and her ever-interesting kaliedoscope of logic t-shirts. Not to mention her asides about Alan Turing – I’d just seen The Imitation Game – and Angela Merkel (did you know Merkel has a doctorate in quantum chemistry and was an active research scientist before she was Chancellor of Germany? I didn’t, because we Americans learn as little as possible about world leaders other than our own, unless scandal is involved, in which case they’re all over the supermarket tabloids). Since I didn’t take the Digital Systems or Prolog modules she taught, I was delighted to find her teaching the Mathematics module, which began with the comment: “Admittedly, it is one of the most abstract branches of mathematics. This abstractness, together with a foundational role of logic, may at least partially explain why logicians tend to be the eccentrics within mathematics departments.” The most interesting mathematicians I’ve met through MOOCs have all been a little eccentric in one way or another – including Jen.

I’m not sure if my fondness for the instructors, limited as their involvement beyond the videos was, followed from my fondness for the material, or vice-versa (or maybe I just loved the font used for slide headers – I believe it’s one of the Barbedors. Yes, I gathered enough samples to Identifont it, what, there’s something wrong with that?), but in any case, I loved this course and highly recommend it – for anyone who wants to understand the basics of formal logic.

Now, that’s an important caveat. You have to want it. Because every logic course I’ve ever taken at the introductory level (that’s three now) eventually turns into ten minutes of:

~~ Transcript for Part 2, Lecture 3.4, “Trees for Predicate Logic”, which is why I didn’t use the transcripts at all for this course

And that sort of thing can drive you crazy. Unless you really want it. But if you want it, this is a great place to get it.