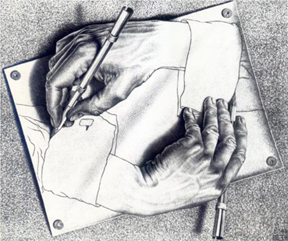 Without a reader of his own, he creates one in a story he calls “The Reader.”

The permeable boundaries between character, narrator, writer, reader; character’s inner world, narrator’s inner thoughts, writer’s subtext, reader’s filter; and elements I haven’t thought of or don’t (yet) know how to recognize or name: what better re-entry into the Pushcart read than Robert Coover. In one 1500-word paragraph (available online, thank you Conjunctions), he creates more tunnels and bridges between word-on-page and “reality” than most full-length novels could handle.

It’s a story of a writer getting lost in his own writing, the reader who gets lost with him, and the real-life reader (maybe?) who tries to follow. I’ve tried color-coding which writer is speaking/thinking at a given time, which reader, but it’s a lot more fun to just take the ride: not only does he burrow down a level, but he also looks up to wonder if he is himself someone else’s “down a level” reality. This is shifting POV to the ultimate: how many writers, how many readers, are there? On the most literal level, there’s a real reader/writer pair in the intermediate layer, a fictional reader/writer pair below that in the world created by the writer, and, potentially, a reader/writer pair at a higher level, writing and reading this story (the reader – me, you – being implicit rather than explicit).

Which, of course, is exactly the case: this is a story about a character who is a writer who creates a world (and sometimes gets lost in it) but it’s also the fictional world created by a writer, Coover, and read by me (among others). The story is what the story says. This is a pipe.

This is how a story ought to end.