I wasn’t sure what it was when I signed up for the class, but I spent some time studying linguistics in college and enjoyed it quite a bit, so why not. I didn’t expect to fall in love.

Ok, so I was primed for the content, that’s true. But this MOOC was terrific; I highly recommend it to anyone with an interest in studying language use. It’s offered by Lancaster University in the UK, via the FutureLearn platform – the British counterpart to Coursera. I continue to be impressed with FutureLearn. It strikes me as a bit more humanities-oriented, and perhaps a tad less “open” than Coursera, that is, slightly more geared towards a populace with an academic background, but I’ve only taken three of their courses – and, after all, they let me in, so how much more open could it be? [Addendum: having taken several more FutureLearn courses, I’ve changed that opinion; in fact, most of FutureLearn now seems to be short-subject courses similar to attending a lecture or watching a documentary. However, there are exceptions]

Turns out, corpus linguistics is “a methodology for approaching the study of language” via statistical analysis of large collections of language, either written or transcribed from speech. Though some efforts were made to do this in the early 20th century, it wasn’t until the availability of computers that it became truly feasible. Imagine putting the one-million-word Brown corpus, compiled in the 60s, on cross-referenced index cards. The internet has enabled even greater possibilities; as Ken Goldsmith likes to say, “The internet is the greatest poem ever written, unreadable mostly because of its size.” So don’t read it: analyze it. The internet was made for the corpus linguistics approach.

This was one of the best-organized MOOCs I’ve taken, particularly in its planning for different levels of experience. At one end of the scale were the curious, like me; at the other end, linguistics professors finding out more about this particular technique. In between were grad students broadening their horizons, and ESL teachers (corpus linguistics has great value to language teaching, both in looking at what language students will most likely encounter, and in looking at what categories of difficulties new language learners share). The primary material was geared towards an introductory level, but each of the eight weeks included a great deal of supplementary material in the form of discussions with working linguists, lectures from advanced seminars, and hands-on guides to implementing the concepts. We were all free to explore whatever we wished. And then there was AntConc, corpus analysis software provided for us along with detailed tutorial videos. This is available to anyone via a free download, but it was great to have everything so well-packaged. The staff, from lead instructor Tony McEnery to the cadre of guest professors and mentors, did a fine job of keeping up with the discussions, answering questions and providing additional information.

I was also happy to see how so much of the work being done via corpus linguistics is aimed at issues of social equality and justice, from hate speech to marginalization of people with disabilities (I just edited my wording there, remembering something from the course – people first, then the disability). And there was fun stuff – the last week was devoted to “bad language” – swearing. Yes, really! Some of that was pure fun (it can be hilarious to watch an academic lecture containing more four-letter words than you’d hear anywhere in the course of daily life), but there was also genuine data there (who swears more, by age and sex, and what kind of swearing do they do: does this match our preconceptions? Does it indicate an attitude?). And there’s the fascinating issue of reclaimed language: a community embracing terms that were previously used as epithets. Even the fun stuff had depth.

I was quite nervous going into this. As has become my habit, I started following Prof. McEnery on Twitter when I signed up for the class, and his tweets were mystifying: 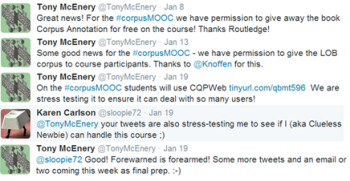 I’ve been taking MOOCs for about a year now, and I’m still amazed that it’s possible to have conversations like this with professors. In fact, as I was finishing up this post, I tweeted Dr. McEnery to ask about the image (shown above) that accompanied the course – is it a microphone? Yes,it is, he replied: “We originally had a nice word cloud, but that was replaced by the image you have seen.” I’m not sure what a disembodied microphone has to do with corpus linguistics,

but I don’t understand why edX’s Effective Thinking Through Mathematics uses a rotting romanesco cauliflower, either, so I’m probably not the best judge of website design. The point remains: many of these courses (though not all of them) are far more than watching lectures and taking tests. I still don’t understand how this is happening, why the schools are doing MOOCs, but as long as they are, I’ll keep showing up.

My regret about this class is that I was taking so many other classes besides, I didn’t have the time to spend on things that I would’ve liked. It’s being re-offered in the Fall, which is great (I’ve become a fan of taking MOOCs twice, something that isn’t possible with in-person classes, especially when you’re paying for them). In the meantime, I have the readings, I have the tools and documentation, and, best of all, I have a project.

It’s fast becoming the sign of a great class, when it leaves me wanting to do something further. Some classes, I enjoy, I learn something, and I go on my merry way. But with this course, as with Coursera’s Modpo and Mathematical Thinking, I end up with a project. A combined Corpus Linguistics/Modpo project, in fact: I want to compare Walt Whitman and Emily Dickenson, perhaps let this comparison find its form in an uncreative poem or dialogue. This will take some time, and I have to get through the next four-weeks-in-eight-classes first. But I’m always happiest when I have a trajectory, and this course helped me find one.