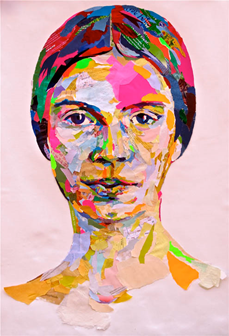 I taste a liquor never brewed —
From Tankards scooped in Pearl —
Not all the Vats upon the Rhine
Yield such an Alcohol!

When “Landlords” turn the drunken Bee
Out of the Foxglove’s door —
When Butterflies — renounce their “drams”
I shall but drink the more!

[Addendum: This course has been converted to the new Coursera platform. Some content may have changed, and the experience may be different]

It may seem I’ve been slacking off on reading and blogging lately, since I only managed one post last week. I’ve been reading like crazy, but I’ve also been flat-out at Coursera. I’ll be back to talk about the other courses I’m taking, but right now, it’s all about ModPo. 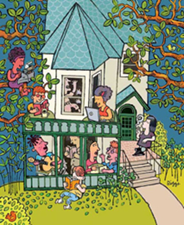 ModPo is the universally recognized (in some circles at least) affectionate diminutive for Modern & Contemporary American Poetry taught, (or, more accurately, facilitated) by Professor Al Filreis out of the Kelly Writers House at the University of Pennsylvania. Yes, I’m taking another course from another heavyweight at another Ivy League university. For free. I love MOOCs.

I’ve been long moaning about my lack of poetic grasp. For Pushcart XXXVI (2012), my second cover-to-cover Pushcart read and the first time I dared to blog about the poetry (albeit cramming them all into one post, rather than taking one at a time, as I do with the fiction), I was surprised at how accessible the poems were, but wondered what I was missing. For XXXVIII (2013), I found some help, but I admitted freely I’m still in the stage of not knowing a “great” poem from a “good” poem from teenage dreck. I want to know the difference. I want to know how it works.

I’d heard some great things about ModPo in other courses. In fact, the discussion boards for most course would include a thread “For ModPo Graduates.” (I confess that I got confused, as usual, and signed up for “The Modern and Postmodern” – an approach to history through philosophy and literature – by mistake, but that’s turning out to be a great class too. But more about that later.)

I can now see why past ModPo students were enthusiastic. The videos, which are in other classes lectures, are here discussion sessions with Al (it’s strange how so many of these hotshot professors end up as first names; if anyone tries to tell you MOOCs are impersonal, send them to me and I’ll tell them a few things) and four to six students at the Kelly Writers Center doing close readings of the poems for the week. And by “close readings,” I mean word-by-word, comma-by-comma, dissections. I live for this stuff.

In addition to the videos, there are weekly live webcasts. They’ve got Twitter going, they’ve got phone lines (the other night, we got calls from Ecuador, Israel, all over the world) and they’ve got people showing up in person right there in Philadelphia: former students, other teachers, poets, Penn students, passers-by who wondered what going on, for all I know. It’s a world-wide electronic town hall of poetry! These webcasts are, by the way, made available afterwards on YouTube.

The class (now going into Week 3) has started with Emily Dickinson and Walt Whitman as the progenitors of two branches of modernism. I’ll admit, I’ve never been a Dickinson fan, other than a couple of stray poems (like “I’m Nobody” – you knew I’d like that one, didn’t you?). I used to like “Because I Could Not Stop for Death,” but it was ruined for me when someone told me all the poems of Emily Dickinson could be sung to “Yellow Rose of Texas.” I haven’t been so devastated since Duncan Nelson sang “Stopping by Woods on a Snowy Evening” to the tune of “Hernando’s Hideaway.” You can ruin people for life with this stuff, y’know? But I think I’m getting Emily back, thanks to this course (yes, the poets are all first names, too).

Where there is reading, there must be writing. Our first assignment: a close reading of the above poem – in 500 words. Five hundred words? I can’t write a grocery list in 500 words; my tombstone will say TLTR. I pared 1000 words down to 750, then to 500-something, close enough. The 750-word version appears below. By the way, if you’re doing a peer evaluation and arrived here via a plagiarism checker, it’s ok, I’m the one who submitted it. If I were going to plagiarise, I’d pick something far more impressive.

I’m beginning to see how poetry really works. This isn’t a bunch of lectures on the different types of meter and rhyme schemes and forms. Those are things I can look up (and I have; I just don’t really remember them for very long, though I know I love a good villanelle and there’s a lot more to haiku than counting syllables). This is different, though. This is finding meaning in everything on the page, from words to a comma to white space. This is about playing with poetry.

The narrative line can be summarized from its four stanzas: I’ve got some great booze – I’m drunk – I’m gonna stay drunk – Forever. Her imagery fluctuates between extremes: Nature, and the Bowery.

The first stanza praises the specialness of her special intoxicant; in the second stanza, we find out it’s not a specific liquor at all, but the products of Nature: air, dew (maybe; but I’ll get to that). Instead of staggering around the town inn, it’s the skies “of Molten Blue” that make up her drinking hall. Skies stretch over the entire world; this brings to mind the same universality of the “gambrels of the sky” from “I Dwell in Possibility.”

In the third stanza the expansiveness continues with her intent: Emily is going to drink the creatures of nature themselves under the table. This worries me a bit, as it embodies the “Humanity masters nature” attitude that has brought us so close to disaster in the 21st century. Emily would have had no way of knowing, of course, the grim turn our mastery of nature would take.

But wait, there’s more: On the surface, Nature seems the obvious inebriant. I could live with that. But, given her penchant for writing poems about poetry, and the penchant of the class these two weeks for focusing on the self-referent quality of modern poetry, I wonder if there’s more: could she also be drunk on writing poetry?

She ends the poem, expansive to the last: she intends to remain in this condition all her life, and into the afterlife. I particularly like this stanza for its imagery:

“The Seraphs swing their snowy caps” evokes just from the phrasing “snow-capped mountains” even as she describes angels. The snowy caps could be those mountains, could be clouds, could be halos – for that matter, the snowy cap also evokes the head on a glass of beer, and swinging a cap to a wild drunken gesture, keeping the base imagery going even after we’ve left the mortal coil.

“And Saints — to windows run -” Because of the religious connotation of “saints” I immediately think of stained glass when I get to “windows”. Are these windows the windows of heaven? The sky? But more than anything, the line, especially ending in a dash, leaves the reader with the question: Why are they running? What is it that has the angels saluting and the saints rushing towards?

It’s Emily, the poet! “To see the little Tippler”. The sly self-deprecation, proud humility really, makes me smile. Here we have the contrast of glorious Seraphs and venerated Saints – huge images, very noble and austere – all rushing to see the “little” poet in her drunken state. She has amazed the court of God himself, and she’s being a bit playful about it: “What, li’l ole me?” She’s armed, after all, with poetry; to reverse Joyce Kilmer, “Maybe God can make a tree, but hey, only a poet can write poetry.” It seems that’s enough to impress the Seraphs and Saints.

And what is it they see the little Tippler doing: “Leaning against the — Sun –” One of the connotations of “sacred” is “separate”: God is separate from humanity, from our world, and thus is holy. This is further emblemized in some religions – Judaism, for example – by the notion of separation: the gartel separates the sacred from the profane parts of the body, and many of the rules of Kashrut (Kosher) were intended to separate the Israelites from the Canaanites, to prevent them from intermingling and thus becoming assimilated into other cultures. This notion of separation seems dramatically emphasized here by setting off “Sun” from the rest of the poem with dashes, not just after, but before. Leaning against the separate – the sacred – God? The seraphs and saints are jealous, perhaps, at how he supports her in her drunken state; he approves of her intoxication on nature. However, this rubs up against a simultaneous image, one much less noble, of the drunk leaning against the lamppost.

While the expansive imagery (everything under the sky from now until kingdom come), the openness of the metaphor (is she talking about Nature or Poetry – or the Universe or Art or… or… or…?) and the dual imagery (drunkenness, nature and the heavenly host) are handy Dickinsonian tools, I wonder if the inclusiveness and uniting of the sacred and profane isn’t a bit more Whitmanian. I think Walt would’ve been proud.

One response to “ModPo mooc: Playing with Emily Dickinson”