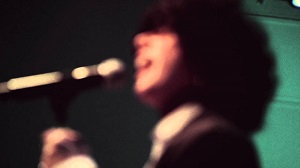 Chris Hayes – political commentator, formerly UP, now ALL IN (I shudder to think what his next show will be called) – usually tweets about, obviously, political stories, the economy, climate change, that sort of thing. Occasionally, basketball. But Monday night, as the Memorial Day weekend came to a close, he sent out something unusual for him:

I thought maybe I was misunderstanding the term “cover,” but what the hey, I clicked on the Youtube link. And found my obsession for the week: LP.

It was very confusing at first. What’s LP? I’m old enough to read it as long-playing; is it the name of the group? And gee, forgive me if I’m being politically incorrect, but… is that a girl or a boy? The song, unfamiliar to me (like most contemp music) is “Halo.” The singing is not always “pretty.” But the longer it went on, the more mesmerized I was. I listened to it again. And again. It’s seven minutes long, but I couldn’t stop watching.

Here it is: When I watch the original, by Beyonce, I see a pretty woman singing a pretty song about a pretty man. It’s nice. But when I watch LP perform it, I believe in salvation. And I really, really want a cigarette afterwards.

I finally tore myself away to look at what else LP had posted, and randomly clicked on “Into the Wild,” and, about a minute in, went slightly insane.

Chances are, even if you’re as out of touch with contemporary music as i am, you’ve heard LP’s voice, though you may not recognize the name the singer goes by. Think: commercial. Rock climbing… got it? “Somebody left the gate open…” Yeah. That’s LP. That’s “Into the Wild.”

In a CNN interview, LP talked about performing that song, like at SXSW, how she (finally got that figured out; now all I have to do is figure out why it mattered in the first place) struggles to not smile just before she sings that line. Because she knows what’s going to happen:

Always after that line, she knows, the murmurs start.
“I see a few of them, every time, look at their friend and go, ‘Ohhhh.’ It’s kind of funny and embarrassing at the same time,” LP said during an interview at SXSW. “And awesome.”

I spent some time, quite a while ago, hunting down the song that went with the ad, and wasn’t able to find anything back then – not surprising since all I had to go on was a single phrase. The mystery is finally solved. But I’ve been spending way too much time on YouTube this week. LP, you’re amazing, but this old lady needs her life back.

I do this sometimes, get stuck on a song, listen to it obsessively. My previous record was 36 iTunes plays over 3 days for Ballboy’s “I Gave Up My Eyes To A Man Who Was Blind.” I think, if I combine views of both “Halo” and “Into the Wild,” I surpassed that by a wide margin this week.