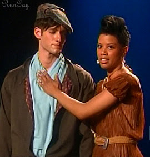 Remember, back in S4, when Tiki Barber came to PR? Carmen’s not-a-shirt, a swath of fabric tucked under the Members Only jacket like a scarf so her model’s chest hair wouldn’t show? Sweet P’s rumpled mess of laundry claiming to be a shirt? The kindergarten attempt at a suit by… oh, what was his name, I don’t even remember?

Turns out, those looks might have looked pretty good amidst the rubble from last night.

But this was a set-up. In the novel that is Project Runway, the exposition’s over; it’s time for escalating conflict and complications. Yawn.

Heidi and Tim join the flock on the runway to create two new teams of four, selected by the three judges. We eavesdrop on their earlier musings:

Zac wants to balance Patricia’s techniques with Daniel’s construction; Heidi thinks Michelle has a cool vibe, so she’s thrown in that group, and Zac wants Stanley to show he can stay strong amid “all these forces” so him too.

Nina pairs Richard’s obvious talent but questionable taste with Layana since he needs her young, hip vibe (and if I never hear the word “vibe” out of these people again, I’ll be very happy). Zac thinks Samantha and her strong opinions will wake up this group. Then we have the inconsistent Amanda because, well, who knows. It’s all bullshit anyway.

All the designers think they’ve been paired up with inferior partners. Funny how that works. Michelle is obviously displeased at working with Patricia again. Layana thinks Richard is good for stuff that’s far out and tacky, Amanda has good ideas but she hasn’t seen it yet, and Samantha is a little tacky as well. You know, guest2visits tried to tell me after S4 that Layana had Pretty Girl syndrome, and I didn’t see it. I see it now. She’s just a little princess, isn’t she. And no one else is good enough for her.

Not just men. MEN. The Cowboy, the Fireman, the SWAT guy, the mailman, the businessman, the construction worker. An Australian dancing/stripping troupe called Thunder From Down Under, apparently the hottest thing in Las Vegas. Forgive me, but all I could think of was the Village People. 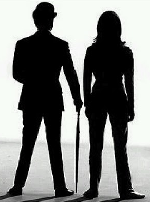 The designers watch them dance and rip their clothes off. Samantha calls them classic action figures. Amanda’s worried her mom’s going to watch this. Daniel would be happy with any one of them; “That was a lot to handle for 10am.” Richard thinks it’s like designing for Thor, The Incredible Hulk, or The Avengers. Am I the only one who still thinks John Steed and Mrs. Peel when I hear The Avengers? Michelle’s a little worried, since she doesn’t know the male beefcake body. Then she recants a little: “My husband is beefcake, but he isn’t that kind of beefcake.” At one point she’s so flustered by the biceps she can’t remember the word “fabric.” And Layana plays Blushing Princess to the hilt.

Each team of four designers must complete three tear-away looks for a new show featuring business attire; one look must be a suit. They have one day. And that’s when I knew it was a setup. One day – a short day, considering at 10am they’re still on site, they still have shopping at Mood to do – to make menswear for guys with thighs bigger than their usual models’ waists, including a suit, using tear-away seams, a technique not many designers have ever seen (turns out Stanley has, but that’s kind of freakish; it might be the reason he was cast). The Season 4 disasters had two days. Nope, this was for the drama, not the clothes.

The guest judge is an actress I’ve never heard of. And I keep wanting to pull up Heidi’s errant bra strap. The runway is hilarious. The clothes are so awful, but you’ve got these male strippers dancing. “It’s like a wet dream,” says Zac. No, no, he didn’t say that, he said “Like a weird dream” but I’m betting they had to re-shoot to clean it up for tv. They all forget to vote, whether it’s because the guys are so attractive, or the clothes are so awful, it’s hard to tell. Nina breaks into hysterical laughter, rivaling Michael Kors’ giggles when faced with the lady wrestlers of S4. The whole episode was like a mashup of S4, now that I think about it. A bad one. Intended to get us sputtering. I refuse to sputter.

Each team also has to come up with a team name, and given the ridiculous things they came up with back in S1, I wasn’t surprised when they came up with equally, if not more, idiotic ideas. Team Slick & Hip? Didn’t they learn anything from Team Luxe? When you name your team after a look, it’s a given that you’re going to end up with something that’s the opposite of that look.

Right off the bat, Richard’s out of touch with his team. Samantha interviews he’s headed for a drag race between Ru Paul and Boy George; Amanda worries about his ‘tude, his dated aesthetic (she’s using the word ‘tude and complaining about his aesthetic?) and his inability to speak her language (she’s visual, he’s verbal); Layana seems to think he gave her the wrong answer about something, but it’s pretty unclear to me exactly what was going on. The actual problem is this: nobody knows what they’re doing when it comes to menswear. Richard volunteers to make three white shirts and he’s never made a man’s shirt before. Ok, I’ll admit, I didn’t know what a collar stand was, but first of all, I’m not a designer, and second, now that I do know what they are, I realize a lot of my more tailored shirts (from back in the days when I wore such things) had them, so they aren’t exclusive to menswear; what’s wrong with these guys? Layana’s the jacket girl, but only girl jackets. Amanda has two pairs of pants to make so she knows they’d better be perfect; is it really a surprise when they’re too short and too tight, even though Samantha’s are just fine and they all used the same pattern?

The highlight of the episode is Amanda’s discovery of the penile bump while goosing the manikin: “It has a bump. A little penile bump. And I do mean little.” Your mother’s gonna watch that, too, Amanda. But Amanda shows she kind of knows her stuff, too: she points out, “Another problem is we don’t have a style.” Layana announces she’s thinking Armani. I guess she expected everyone to pick that up by telepathy. But Amanda goes with it: “Oh, so mid-century, slimmer cut, slimmer lapel.” I have no idea if that’s actually Armani, but if so, she’s not as non-verbal as she claimed with Richard. Of course, it could be completely off (isn’t Armani pretty current?) in which case she’s proved her point. I’m flexible.

Richard gets beaten down by the girls to the point where he Skypes a friend in tears. Poor Richard, he has a band-aid on his head over his ear, he must’ve cut himself shaving his scalp that morning, too.

Predictably, the result is a complete mess. Richard’s shirts look like bad kurtas; they can’t be tucked in because Amanda’s pants are too tight, the point where they’re opening up during the Q&A. Even Layana’s tie looks ridiculous – hey, I think I might be able to make a tie, isn’t that the first thing they teach you in home ec? – and her jacket is too small and ridiculously feminine. The only thing that looks halfway decent is Samantha’s vest, but it’s hard to see because Richard’s shirt is so scary-awful. On the plus side, the clothes tear away perfectly when the guys dance. And with these clothes, the faster they tear away, the better.

Shades of No Way

I’m beginning to wonder if someone cooked the books on Michelle early in the season. Why is it that for the first four episodes – at least two of which involved no collaboration at all – were distinctly mediocre, and now for three weeks she’s been churning out the best stuff on the runway? It’s almost as though she had the narrative when she started, and deliberately held back for several weeks, to create a character arc. That isn’t something someone would do, right? At least, not unless she knew she’d already been chosen the winner, or at least guaranteed the time to complete the ascension? Thing is, Christian took a while to get started; maybe a little time to get the feel of things is necessary. Whatever the reason, at this point, she’s actually (almost) equal to her opinion of herself.

Not that her design is good; it’s nonsensical in the context of the challenge and the other looks. But it’s something different and interesting, and it looks like a draft of something that might turn into something interesting, if it weren’t supposed to be related to work. And strippers.

Not only that, but she starts off the planning session with a good idea: an office guy in suit, a more casual worker, and a bike messenger. Stanley shoots her down (after a struggle, during which Michelle admits on national television that she fantasizes about bike messengers on a daily basis; I’m sure her different-kind-of-beefcake husband will be happy to hear that; maybe he’ll tell her about his fantasies, too. Maybe there’s a reason for that rumor about post-PR break-ups). I think her kilt-vest is possibly a thumb in the eye to the team’s more “classic” vision.

Since Stanley just made tear-away suits a few months ago for a photo shoot, he’s doing a suit; he suggests that Patricia make a basket weave textile for the plackets of the shirt, which is a good use of her skills. Of course, it doesn’t quite work out that way, as the shirt she ends up making is pretty hideous once it escapes from under the boring and vaguely obscene trench coat Daniel takes as his destiny. Interesting that Tim sees clergy in that trench coat. Overnight, Michelle tells Layana, “If the ship is sinking and there’s only one lifeboat, I know who’s going over.” Layana guesses Patricia, twisting the metaphor into a soggy pretzel. On the runway, their clothes don’t have quite the same level of horror as the first team, but the tear-aways fail. And this I have learned from Project Runway: There’s nothing funnier than a stripper with his pants tangled around his ankles.

It’s All Over but the Shouting:

completely screwed up. The conversation with the judges is hilarious:

Nina: “Why not be creative?”
Patricia: “We were thinking office looks…”
Zac: “Stop – what office story does this tell you?”

He’s got a point. Ever seen these guys in an office?

Heidi falls all over herself in Little Chat trying to convince the actress these really are designers and they have produced some decent looks in past challenges, but in the end, she just can’t name a winner. Best decision all season.

As for the losers, it’s evident that Samantha is safe, and somehow the Princess gets by, so it’s between Richard and Amanda, who can’t decide if they want to snipe at each other or kiss and make up. Amanda’s out, so it’s moot.

Didn’t they just do a Lord & Taylor challenge? No, that was last season… they’re all beginning to run together.

5 responses to “Project Runway S11: Episode 8, Take It All Off (and as quickly as possible, please)”