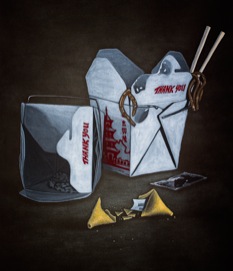 I was at home, not making spaghetti. I was trying to eat a little less often, it’s true. A yogurt in the morning, a yogurt at lunchtime, ginger candies in between, and a normal dinner. I don’t think of myself as someone with a “weight issue,” but I had somehow put on a number of pounds just four months into my unemployment, and when I realized that this had happened—I never weigh myself; my brother just said to me, on a visit, “I don’t recognize your legs”—I wasn’t happy about it. Although maybe I was happy about it. Because at least I had something that I knew it wouldn’t be a mistake to really dedicate myself to. I could be like those people who by trying to quit smoking or drinking manage to fit an accomplishment, or at least an attempt at an accomplishment, into every day. Just by aiming to not do something.

I was very happy to see another story by Rivka Galchen; I enjoyed last year’s “Appreciation” and was hoping to read more; turns out I liked this one even better. It’s available online.

She does something very interesting in this tale of mutual marital deception: she switches tenses. I was so into the story on first read – jumping ahead to the next image, the next phone call, the next phrase that perfectly summed up a marriage in which both spouses are denying something, the key moment when the issue is pressed and the pretense falls away – that I didn’t really notice. I frequently suffer from tense-deafness (my recaps in particular get jumbled up, quite by accident) unless I’m very focused on construction, so I’m not surprised I didn’t notice. And the edges of the shifts she does are sometimes blurred by recounting events of the past, or using either-tense words (like “read”). But still, I should’ve noticed. It’s not just a style fetish; it’s significant to the character of the narrator, as she explains in her Page-Turner interview:

She’s a bit of a magical thinker, the narrator, and she’s devoted to her own account of reality. When she speaks in the past tense, she can more easily maintain her account; she can edit out unwanted information pretty easily, and reclaim certain ignorances that are, in fact, no longer hers. Being “spacy” is her defense, and it’s a relatively effective one.
But certain situations—usually another person intruding on her solitude—startle her out of her perspective, and into the present tense. Then she’s no longer in control of the story, and she can’t really say with authority “how it was.”

I couldn’t get it to work quite as simply as that – isn’t there at least one reverie in present tense, about the UPS women’s pants? – but I love the idea. I love writers who really use language, all aspects of it. Like emphasizing what is not being done right off the top. What is not done, said, acknowledged, is far more important in this story than what is.

Our unemployed not-making-spaghetti narrator gets a call from a random wrong-number-dialer ordering Chinese food. I was so into this story already, I didn’t even worry about why the guy didn’t notice they didn’t answer the phone correctly or take his order in the usual way; I think I’d notice if I called a home instead of my go-to Chinese delivery place. Realistic details don’t seem to matter much here, and I went with that before I could even articulate “shaky grip on reality” as a foundation of the piece. The narrator promises prompt delivery, and even debates making Garlic Chicken (or was it Lemon Chicken?) for the man, but hasn’t written down his address.

This brings us back to her fantasy escapism. It’s how she copes with a lot of things, like being not employed, and oh, her husband’s wedding ring went missing for who knows how long before they happened to notice and “he got a little weird” about explaining it, but it isn’t like it matters, they aren’t into symbols, which is what someone who lives in Denial Fantasyland would do. It took me three weeks to notice my now-ex-husband’s ring was missing, and then he was pissed at me because it took me so long, but that’s a whole ‘nother story. Though not really – Boo (narrator’s husband) gets pissed because she isn’t enthusiastic about looking for it in the courtyard where he’s sure it fell off due to an ice-cold water bottle he was holding, which beats any cock-and-bull story my ex ever tried to put over on me. And that’s saying quite a lot. Maybe that’s another reason I liked this story so much.

Through the argument she still maintains the fantasy:

Some people save their marriages—not that our marriage needs saving, not that it’s in danger, one can’t be seduced by the semantically empty loss of a ring, I remind myself—by having adventures together. We could pull a heist. Me and Boo. Boo and . . . well, we’d have some Bonnie-and-Clyde-type name, just between ourselves. We could heist a U.P.S. truck full of iPhones. On a rural delivery route. The guns wouldn’t need to be real, definitely not. We could then move to another country. An expensive and cold one where no one comes looking and where people leave their doors unlocked because wealth is distributed so equitably. This is not my kind of daydream, I think. This is not my sort of idyll at all. It is someone else’s idyll. I may be happy with that. I was never a Walter Mitty, though I always fell in love with and envied that type. But a Walter Mitty can’t be married to a Walter Mitty. There is a maximum allowance of one Walter Mitty per household, that’s just how it goes.

I’m always interested in naming, and here, not only do we not get the narrator’s name, which happens sometimes in first-person narration, but she can’t even come up with a Bonnie-and-Clyde-type name for herself, this woman who’s so into fantasy. She’s so busy spinning wheels to run from the truth, she can’t be bothered to spin those not essential to her denial. I’m also very impressed with the graceful protesting-too-much about the ring being semantically empty.

There’s also some intrigue around the word “tender.” It’s an interesting word coming in three parts of speech and having several different meanings but all stemming back via French and Latin to the proto-Indo-European root of “ten-” meaning “to stretch” (to reference stretching the truth?). It’s used five times, mostly as a verb in the phrase “tender my resignation,” and her recollections of that word and phrase, but also as an adjective in describing her telephone argument (between Chinese food phone calls) with her husband over whether or not she should go out into the courtyard and look for the missing ring: “His voice has hairpin-turned to tender.” Notice, not “turned tender” but “to tender.” To tender his resignation, perhaps, in the argument, or, in the larger scheme of things, the marriage? Is this a place where her mind is tricking her, reminding her of that phrase, connecting it with her recollection of tendering her resignation, which becomes so crucial in the closing scene, when the other shoe falls and we find out Boo isn’t the only one pulling a fast one?

The title also reflects the woman’s unmooring in reality, and I began to wonder after I sat with this a while – is the husband real at all? Or is he a part of her own mind, reminding and accusing her? I’m not sure. I feel like there’s a lot more to this story than I realize, yet I very much enjoyed it, which perhaps means it’s leading me somewhere and I just haven’t quite arrived there yet.

I’m not going to spill the ending – other than to say I felt a shift in her (“A faint fleeting smile, in front of the firing squad”), a certain relief, a sharpening of focus even in her fantasizing state – I have to leave some impetus to read the story. Go ahead – it’s relatively short, and it’s very readable.

I’m really liking Rivka Galchen. In addition to a 2008 novel, she’s got about a dozen fiction and non-fiction pieces here and there; I’ve got a list, largely from and inspired by Paul Debrasky’s Rivka Galchen read from last year. So I’ve got a project. Coming soon to a blog page near this one.