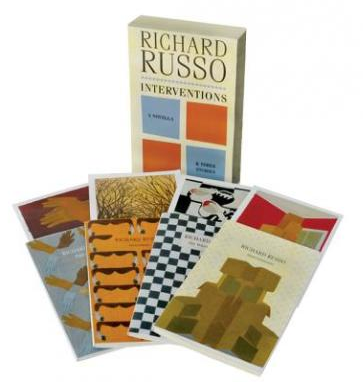 It took five months (!), but finally, the library copy of Interventions finally ran through the however many people requested it before I did, and got to me.

Last July Richard Russo gave a talk about the project at the Portland Public Library. It’s not so much a book as an homage to the Form of The Book. I’m afraid I’m a bit of a Philistine when it comes to books as objects. I’m perfectly able to appreciate a beautiful book: teeny-tiny books appeal to me greatly, I felt enormous relief when BASS went from irritating chartreuse in 2011 to beautiful navy blue in 2012, and I practically had a sexual relationship with the matte cover of Cliff Garstang’s What the Zhang Boys Know. But I don’t care much about First Editions, I don’t worry about “mint condition” (I underline, I dog-ear, I crack spines like a sadist), and I prefer paperbacks simply because they’re cheaper and easier to carry.

So while I greatly respect Russo’s intent and his efforts to have it locally and ecologically produced, and it is in fact made up of four almost teeny-tiny books plus post-card-sized art all included in a slipcase, I wasn’t going to spend $40 on a collection of four pieces, one of which I’d read already, and one of which was available online. But I’m glad I’ve now had the chance to hold it in my hand, and to read the material I hadn’t seen previously.

The stuff of other people’s lives is problematic mostly for them. The disinterested eye sees where things go and in what order. Not where they belong, just where they fit….
By the same token, though, could a man judge his own merits, reward his own efforts, and call it justice?

Note the story title is singular, while the book title is plural. I was especially interested in this story after hearing his discussion of it at the library, and it didn’t disappoint. Ray’s a real estate agent, trying to sell Nicki’s house. She’s desperate to sell, since she’s lost her job, and is only weeks away from foreclosure. But she’s packed everything up in boxes and left them sitting in piles throughout the house, making it nearly impossible to show effectively. Every suggestion Ray makes is batted down as unacceptable for various reasons.

But though I got the impression at the talk that this was the main story, it’s really a story about Ray. He’s got a tumor, and he needs to do something about it, quickly, but he’s resisting every attempt to help, every suggestion. It’s his version of boxes. And it’s not fear of dying that’s stopping him:

He’d have to give the bastards his pants…. He was about to become yet another bare-assed, middle-aged man, the kind who didn’t get to make decisions.

I’ve often said that I could fix everyone’s problems, if they’d just do what I’d say; my own, not so much. This story was very effective at zeroing in on that. Maybe a little too effective – too on-the-nose – but there’s another subplot involving Ray’s parents that broadens the scope a bit to include issues of perception and freedom. A highly readable, engaging, enjoyable story.

“I thought,” she said carefully, rubbing her moist palms against the cushion of her chair, “that was the whole idea of literary criticism. Isn’t the ‘I’ supposed to disappear? Isn’t the argument itself what matters?”
“That’s what we teach,” he conceded. He’d taken his glasses off and was cleaning them with a handkerchief—unnecessarily, it occurred to her, an affectation. “It’s what I was taught, and I used to believe it. Now I’m not so sure. The first-person pronoun can be dispensed with, it’s true. But not the writer behind the pronoun.”

I sometimes get nervous that my posts contain too much of my personal reactions to stories and books; maybe I should focus on point of view and character and not get so much into why something reminded me of what happened in fourth grade or how I sympathize with a character who has familiar shortcomings. I’m enormously grateful to this story (available online as well as in BASS 2007) for giving me permission to personalize – for showing me how powerful a personal interpretation of literature can be:

… they’d argued, the way only happy, drunken graduate students can, about which was the greatest lyric poem ever written. You could nominate a poem only if you were able to recite it, start to finish, from memory. Then you had to make the case for its greatness. Robbie had surprised her by reciting Kubla Khan in its entirety, to wild applause. When it was Bellamy’s turn, he’d recited “Windy Nights,” a children’s poem everyone but Janet remembered. He emphasized its childish iambic downbeat by slapping the table so hard the water glasses jumped, and by the time he finished the entire group was weak with laughter. “Okay, okay, okay. Now the explanation,” someone insisted. “Tell us why that’s the greatest poem ever in the English language.”
“Because,” Bellamy said, suddenly serious, his eyes full, “when I speak those words aloud, my father is alive again.”

Janet’s an English professor dealing with a student who’s handed in an old exam as his. But that’s just the vehicle for the real story, which is about Janet’s tendency to back away from things and handle them by the book. It’s why her marriage is a bit tense, now that her husband is primary caretaker for their autistic son. The son who rejects her.

But if she thought I wasn’t paying attention on Martha’s Vineyard, she was wrong.… When we saw people in the dining room we’d met the day before, everybody stood up and we all shook hands. “Did you notice how clean his fingernails were?” my mother whispered when whoever it was had left, and I knew I was supposed to compare them to the fingernails of men who worked in the skin mills.
What I’d noticed, actually, was that none of the men on the island were missing fingers.

This essay about Gloversville in upstate NY, Russo’s home town, appeared in the Summer 2010 issue of Granta (an excerpt of one section, “The Foothills,” is available online). A town famous for glove-making, it also housed a community of immigrant leatherworkers who flocked there from Europe at the turn of the century, then were discarded in the 60s as declining demand, paired with use of cheap foreign labor, turned the town obsolete. But Russo is a storyteller, and that’s evident in the essay. Not only for the sad irony of the glove workers’ most telltale injury – destruction or amputation of their hands and fingers – or for the description of the “vertical” nature of the mill buildings – the worst jobs, receiving and tanning leather, were on the bottom floors, and the best, cutting and sewing, were on the top floors, “high and dry” – but for the ending, as he finds himself with an apartment in what used to be the Leather District of Boston.

Because coastal Maine, where my wife and I live, is remote and I now have to travel a good deal, we recently got an apartment in downtown Boston with easy access to the airport and train station. We looked in a lot of different areas but finally settled, as I knew we would, in the Leather District, a neighborhood of mostly abandoned leather businesses. We’re on the seventh floor of an eight-story building, high and dry, which I think would make my grandfather smile.… At some point I became aware of the tears streaming down my face, aware that I wasn’t in Boston anymore, not really, but rather back in Gloversville, the only place I’ve ever called home and meant by that what people mean who never leave.

I thoroughly enjoyed this story, as much as when I first read it in his collection of the same title almost two years ago. The nun’s desperation to tell her heartbreaking story, and the students’ gradual understanding of what is happening, make for a wonderful build in tension.

What struck me, after reading “High and Dry,” was the autobiographical nature of all these stories. Granted, most of the stories I’ve read from Russo feel autobiographical; when I read The Whore’s Child I made some remark about all the New England beaches and writers parading through the collection. But I was especially struck by how personal a story “Intervention” was, after reading about his childhood in Gloversville.

It was definitely worth the wait.