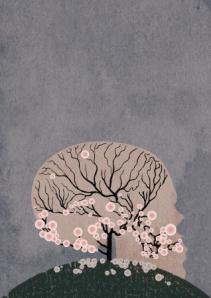 I suppose it’s hard to write a story about dementia that isn’t heartbreaking, but this one has the distinction of being exquisitely beautiful as well. This story was included in the “Horror” issue of Granta, and when you think about it, nothing could be more appropriate.

When I read Otsuka’s The Buddha In The Attic earlier this year, I called it “brilliant and stunning, a wonder to read both on the story and discourse level.” I hate to repeat myself, but this story also qualifies on all counts. And again, as I did with Buddha, I have to acknowledge that some readers will be put off by the style: the repetition of what the woman does and does not remember, the narrative point of view (I don’t even know what to call it; the best I can do is compare it to Rick Moody’s “Boys” and call it third person via second person; does that make it sixth person?), the nontraditional structure. But it’s still a story: just look how much information about this family is conveyed in that paragraph quoted above.

Otsuka’s gift is finding gloriously lyrical ways to tell stories. Here she juxtaposes humor (a little motherly matchmaking in the supermarket) and tragedy (“She remembers that she is forgetting. She remembers less and less every day”), present and past, what is remembered and what is forgotten, while filling in where this family has come from as she moves forward in time, the progression marked most dramatically by such mundane things as the President’s dog, red dust, and the long nose of a baby daughter long dead.

Try reading the story aloud. Each paragraph has a rhythm, a cadence. But it’s still a story, about an unnamed woman – a child at the start of WWII, when her father was taken away by the FBI and her family was interned in the desert – and the living oblivion she now faces, as told by the loving, horrified daughter helplessly witnessing her decline.

She remembers her mother killing all the chickens in the yard the day before they left. She remembers her fifth grade teacher, Mr. Martello, asking her to stand up in front of the class so everyone could tell her goodbye. She remembers being given a silver heart pendant by her next door neighbor, Elaine Crowley, who promised to write but never did. She remembers losing that pendant on the train and being so angry she wanted to cry. It was my first piece of jewelry.

She was in love with one man, but married another when the first jilted her. She had four children, but only three survived –

– one of whom is the daughter, the “you” of the story, who looks in on her periodically, presumably forming the structure of the sections we read here.

One of the hallmarks of Alzheimer’s is the loss of recent memory, while distant ones stay intact. So this woman remembers clearly the events of her youth, even the Latin she excelled at in school: Diem Perdidi – “I have lost the day.” But she forgets how to make coffee, how to get up from a chair.

She remembers that the first time she and your father took you to Japan to meet his family you were eighteen months old and just beginning to speak. She remembers leaving you with his mother in the village while she and your father travelled across the island for ten days. I worried about you the whole time. She remembers that when they came back to you, you did not know who she was, and for many days afterward you would not speak to her, you would only whisper in her ear.