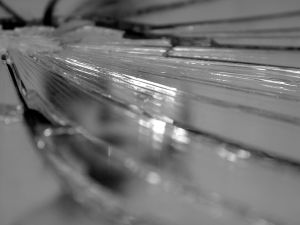 I should have said no to the stranger at the door, with his skinny throat and his black sample case that pulled him a little to the side, so that one of his jacket cuffs was higher than the other, a polite no would have done the trick, no thanks, I’m afraid not, not today, then the closing of the door and the heavy click of the latch, but I’d seen the lines of dirt in the black shoe creases, the worn-down heels, the shine on the jacket sleeves, the glint of desperation in his eyes. All the more reason, I said to myself, to send him on his way, as I stepped aside and watched him move into my living room.

When I read this story a year ago in TNY, I used the word “jumbled.” I was happy to see it here in BASS, to give me another shot at it. It was far less jumbled.

For some reason, I’d thought it was more complicated than it was. I actually went back to the original online version at TNY, to see if it had been edited; it hadn’t. I enjoyed it far more now than I did back then, and I feel like I got more out of it. Of course, it’s all a matter of perception, isn’t it?

I was again struck by the language with which the narrator describes the changes he sees post-Polish, particularly the attitudes ascribed to his reflection early on: “a man who had something to look forward to, a man who expected things of life” and “a man who believed in things.” It’s one thing to look rested or even alert; it’s quite another to look forward to expect, to believe. These are things one might become, qualities to hope for.

When the narrator describes changes to clothing, it’s a little different of course, since a piece of fabric can’t expect or believe. But it’s still a shift in perception. “Rumpled” pajamas now have “a certain jaunty look.” Monica “was dressed in clothes that no longer seemed a little drab, a little elderly, but were handsomely understated, seductively restrained.” I’m reminded of one of my favorite quotes, by Rabindranath Tagore: “When I stand before thee at the day’s end, thou shalt see my scars and know that I had my wounds and also my healing.” It’s the narrator’s interpretation that is changed, not the image.

But though he sees a man who might believe and expect, he doesn’t seem to change his life much. He doesn’t start achieving more because of this attitude; he feels better, but it seems a sterile kind of improvement. A change without any effect.

The picnic, with its afterglow of gloom, reminds me of afterimages caused by fatigue of the rods and cones of the eye. But I’m still not sure why the bright sunlight had the effect it did; perhaps the use of all the mirrors had trained him to see as if affected by the Miracle Polish, but only enough to be evident in bright sunlight?

Something else occurred to me: Miracle Polish has been terribly isolating for the narrator, hasn’t it? He races home from work to the comfort of his mirrors. He loses his girlfriend, a less-than-close relationship, but seemingly the only one he has.

Apparently not everyone appreciates the effect of the mirrors; Monica didn’t. It isn’t that the polish had no effect; she noticed it. She simply didn’t want to live in that kind of altered reality, or she might have borrowed a little polish for herself. Instead she demands he choose, her or the woman in the mirror. Reality straight or altered. And he becomes hostile when forced to give up his mirrors. This took me to substance abuse – the obsession, the feeling better without change, the crack in their relationship – and suddenly the story had a whole new angle:

One of these days the stranger is bound to come again. He’ll walk toward my house with his heavy case tugging him to one side. In my living room he’ll snap open the clasps and show me the brown bottles, row on row. Mournfully he’ll tell me that it’s my lucky day. In a voice that is calm, but decisive and self-assured, I’ll tell him that I want every bottle, every last one. When I close my eyes, I can see the look of suspicion on his face, along with a touch of slyness, a shadow of contempt, and the beginnings of unbearable hope.

Perhaps the salesman – the salesman who opens and closes this story – is similarly isolated, and is seeking, not to make money from selling the polish, but a compatriot? The narrator as addict. The salesman as pusher. As deal-making Devil.

I wonder – if I read this story again in a year, will I again see something new?