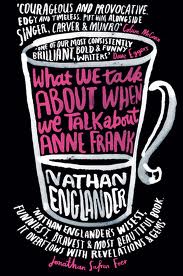 They’re in our house maybe ten minutes and already Mark’s lecturing us on the Israeli occupation. Mark and Lauren live in Jerusalem, and people from there think it gives them the right.

[Note: I posted about this story when I first read it in The New Yorker last December, but I did a lousy job; I was too focused on comparisons to the Carver story to really pay attention to the one I was reading, though I knew through Englander’s Page-Turner interview at the time that he’d avoided re-reading the story himself. So I’m giving it another go.]

It’s an immensely complicated, though essentially “plotless,” story. Mark and Laurel (Yerucham and Shoshana) are Hasidim who’ve lived in Jerusalem for the past twenty years; they’re in South Florida to visit Mark’s ailing father. The narrator and Deb are non-observant Jews living in South Florida. Deb and Laurel went to school together, and are visiting for the first time since then; the two couples sit around talking. That’s it.

It’s all in the details.

Who touches whom – who clings to whom, and why – and who can’t touch. Where they are at any time – the den, the kitchen table, the floor, the back yard, the pantry – and why they went there: for a drink, to play, for food. What name, their given names or the Hebrew names they prefer, the narrator chooses to call the two visitors – and how not only what he says changes, but how he uses those names in the narration of the story. The snipes that take place, under guise of “conversation.” Who likes whom. Who approves of whom.

Most of the discussion falls into the category of what it means to be Jewish. Is it a religion, a culture, an ethnicity? Is an Ethiopian convert, or a guy who lives a non-religious life in South Florida, just as Jewish as an Hasidic Yeshiva-educated son of a Jewish woman? Is intermarriage the second Holocaust?

There’s some amazing choreography, both verbal as topics weave and course, and physical. They start in the den, looking at pictures and meeting the teenage son. Then to the kitchen for a drink and, as the afternoon progresses, a few joints (suggested by Laurel, since everyone in Israel smokes pot, apparently, and fortunately, Trevor hides his in the laundry hamper). At one point Deb, stoned, is on the kitchen floor, and the narrator joins her, holds her, comforts her, until they are lifted up – back – by Mark. They go out and play in the rain. An attack of munchies brings them to the pantry, a small room rather than the closet I’m familiar with.

Have you ever thought about what room in your house would be ideal for hiding a family in the event of a second Holocaust? I haven’t. But Deb has. It’s the pantry, and being in the pantry, stoned, leads Laurel/Shoshana to bring up the Game.

“It’s not a game,” Deb says.
And I’m happy to hear her say that, as it’s just what I’ve been trying to get her to admit for years. That it’s not a game. That it’s dead serious, and a kind of preparation, and an active pathology that I prefer not to indulge.
“It’s the Anne Frank game,” Shoshana says. “Right?”
Seeing how upset my wife is, I do my best to defend her. I say, “No, it’s not a game. It’s just what we talk about when we talk about Anne Frank.”
“How do we play this non-game?” Mark says. “What do we do?”
“It’s the Righteous Gentile game,” Shoshana says.
“It’s Who Will Hide Me?” I say.
“In the event of a second Holocaust,” Deb says, giving in. “It’s a serious exploration, a thought experiment that we engage in.”
“That you play,” Shoshana says.

Imagine yourself, stoned, having confided some things to people you don’t really know, having played in the rain with them, having fretted about what your husband is saying to them – and suddenly you play this game, and try to imagine: Would your husband, if he were Gentile and you were not, hide you? What I truly love about Englander’s handling of this is that he doesn’t look at who would or wouldn’t; he looks at who believes the other would or wouldn’t.

So here they are, on the last page of this story, in this pantry, this closed room – they can see the sun dimming again through the crack under the door – and now Deb and Shoshana consider whether their husbands would hide them.