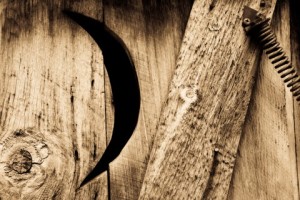 For a long time after her husband died, Marina used to scream. She’d feel the scream rushing up from her stomach, choking her from the inside, and she’d run out of the room, stumbling over her kids’ toys, and hide in the hallway, in the narrow space between the coatrack and the mirror stand, biting down on her right forearm to muffle the sound. After the scream had passed, and she unclenched her teeth, there would be little circular marks on her arm that looked like irregular postage stamps. Those scars remained long after Marina had stopped screaming, long after she had ceased grieving for her husband altogether

I think that’s what this story is about – the marks of events long past that stay with us, remind us. It’s available online so you can read it for yourself and see if you agree.

It’s an extended flashback flanked by home health care worker Marina’s visit to cancer patient Elijah, brought on by the news that Bobby Fischer had died. Elijah bears his marks, too – “tiny, wrinkled, wearing his cancer hat” (he almost sounds like a baby; initially, I thought he was a child). As does the night health care worker, the creases on her face and dried saliva on her mouth betraying her sleeping on the job. But it’s Marina’s marks that take center stage.

Marina and husband Sergey, liberal Jews, lived in Russia in 1972; they faced various forms of bigotry and political retribution: Marina wasn’t able to get into grad school, and Sergey wasn’t allowed to travel to a scientific conference. Just before the summer, they decided that, if Fischer won the chess match against Spassky, they’d apply for exit visas, a risky move. They knew people who’d lost their jobs and faced serious repercussions after being denied.

Color was what impressed Marina the most in the glimpses of foreign life that she saw in movies and magazines. Cars painted yellow and blue and green. Pink houses. Azure swimming pools. Red bras. Crimson lipstick. Straightforward envy over everyday objects grew into a kind of existential restlessness. She felt as if she were boxed up in some bleak, inferior world, while other people were outside enjoying bright and wonderful lives. Sergey took it especially hard. Ever since he was a child he’d experienced the lack of freedom as a physical thing. He liked to keep the frames of his glasses a little loose, to avoid even the slightest pressure on his temples. He never wore gloves, not even in the dead of winter, because they stifled his fingers. Sasha grew up to be just like him. Or even worse. He never wore ties or turtlenecks and always bought shoes a half size too big.

They spend the summer with their five-year-old son Sasha in a hilltop dacha. Martina’s fears multiply as she reads the newspaper reports of the chess match. Vapnyar sets the following scene in an outhouse,:

Marina’s secret pleasure was to read these pieces of Pravda the next day. Their outhouse was exceptionally roomy and clean, with the bare minimum of stench. In the daytime, light came in through a tiny overhead window, just enough to read by. Marina had always read newspapers for entertainment, rather than for information. She hated the urgency with which some people (Sergey included) read newspapers, their belief that the mere knowledge of certain events—belated, incomplete, and often false knowledge—made them active participants in society. She was fine with the outhouse version of the news, soggy with the humidity, sliced into uneven pieces, perfectly random. “A tenth grader, Galya Kolbasina, won the competition for young tractor operators. Her skill and knowledge of the tractor’s technical characteristics impressed the judges.” “Slobodans will celebrate the 450th anniversary of their glorious city, Sloboda.” “The Bolshoi Theatre will show ‘Madama Butterfly’ in the morning, ‘Swan Lake’ at night.” “Proletarians of all countries, unite!”

Reading these scraps of Pravda filled Marina with a strange sense of comfort. Here she was, alone in a cozy little place, calm and untroubled, while other people went about their lives. Children competed in tractor competitions, ballerinas danced, Slobodans celebrated Sloboda, and proletarians united. It was there that Marina realized that she didn’t really mind the Soviet Union so much. She decided that she wouldn’t be too upset if Fischer lost the match.

Choosing an outhouse strikes me as an unusual and risky choice – and for me the risk was worth it: the image of Marina in the outhouse, hiding her fear and anger, living with it all alone, is unforgettable.

I’m also a little stunned by her comment about “knowledge of certain events” making people feel like they’re participants in society. I think I see a lot of that now – from teenage followers of celebrity tweets and Facebook pages – to news junkies from both sides of the issues (and I confess, I felt a stab of recognition there). Then there’s her effort to convince herself things aren’t so bad, as if she’s playing Persephone to herself: “My dear, my dear, It is not so dreadful here.”

She comes to hate Fischer as the match proceeds, and thus, fulfills her own prophecy of feeling like a participant through reading. But her life, at least her quality of life, depends on the outcome of the match. It’s a bet far bigger than anything waged in Vegas, and fills the story with tension, even though we all know how the match turned out, and, from the opening of the story, that she did make it to America.

When Sergey tells her Fischer won, she denies it, and runs off to the outhouse again. She knows two things: she doesn’t want to emigrate, and she will lose Sergey if she doesn’t. There’s a sad irony to this, given that we know Sergey did in fact die, thirty years before the present of the story – which turns out to be a year after they arrived in the U.S., and three months into her pregnancy with her daughter. She considered abortion, but decided against it. Another mark.

And possibly more than that: while Sasha is part of the outhouse summer, neither child is part of her present life, at least as written. It’s possible they all live together and have family dinner every night, and it’s possible the kids live in disparate places and communicate by occasional letters and calls – we don’t know how those marks are carried, as Vapnyar chooses not to show us. I think it’s an odd omission, so it must be deliberate, giving Marina an air of solitude, someone who’s done all that was expected of her and now is alone in the world, without the comfort of those she supported.

And now she’s working for Elijah, who seems to be terminally ill. Is this her choice in life, to be with those who will disappear, leave her behind? Or is it just the way it works sometimes? Or is it how life always is – barring simultaneous deaths, every relationship ends in loss, in one way or another.

What we do know is that she had an education in Russia, was planning on grad school, but it seems none of that translated (a not-uncommon issue among immigrants). So she came to America for… what? In her Page-Turner interview, Vapnyar says, “The whole story is about a myth being destroyed.”

She also calls it “a love story more than anything else.” So the story closes by assuring us Marina harbors no bitterness: as Elijah, who was present at the chess match in 1972, admits Fischer was a jerk even then, and his anti-Semitic ravings as he became crazier and crazier were not solely the function of a demented mind –

Marina was suddenly overcome by an urge to protect Fischer. In those last interviews, he looked like a lost old man, scared and sick. She felt pity and something like perverse affection for him.

“I think you’re too hard on Fischer,” she told Elijah. “I used to hate him, too,” she wanted to add, but Elijah had closed his eyes again.

There’s a lot about this story that’s puzzling. Elijah, especially; a cancer patient who was at the chess match is a little too on-the-nose, a little too coincidental. I didn’t realize on first read he was more of a foil, someone for Martina to react to, than a character in his own right. I was a little off-kilter for much of the first reading, not realizing the flashback was the story. I enjoyed much of the writing, and several scenes were very powerful; the parts worked, even if I’m uncertain about the whole.

And I feel I’ve had a micro-tour of Russian/Soviet reading – from Ivan Illyich to last month’s Tsypkin to this Russian-American finish (and, to throw a curve into the mix, it’s blended nicely with this season of Project Runway, with its Ukranian- and Belariussian-born contestants. Maybe this is a sign to add more Russian Lit to my upcoming goals list?