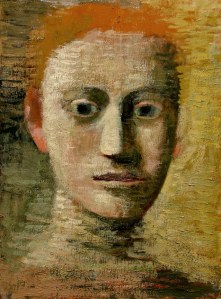 Tom is born in 1914 in Detroit, a quarter mile from International Salt. His father is offstage, unaccounted for. His mother operates a six-room, underinsulated boardinghouse populated with locked doors, behind which drowse the grim possessions of itinerant salt workers: coats the colors of mice, tattered mucking boots, aquatints of undressed women, their breasts faded orange. Every six months a miner is laid off, gets drafted, or dies, and is replaced by another, so that very early in his life Tom comes to see how the world continually drains itself of young men, leaving behind only objects—empty tobacco pouches, bladeless jackknives, salt-caked trousers—mute, incapable of memory.

What might your life be like if you were born with a hole in your heart, back before open-heart surgery was possible? If you learned, at the age of four when fainting spells started, that your life expectancy was sixteen; eighteen, if you’re lucky? If the doctor advised against any excitement – your heart only had so many beats in it, after all – so your mother moved your bed into a closet away from lights and sound, then handed you the mop and steel wool to do your chores with the warning to “Go slow”? If the salt mines – what an image, those salt mines, a frequent metaphor for hard labor – were part of your minute-to-minute life:

Every day, all day, the salt finds its way in. It encrusts washbasins, settles on the rims of baseboards. It spills out of the boarders, too: from ears, boots, handkerchiefs. Furrows of glitter gather in the bedsheets: a daily lesson in insidiousness.

You might spend your heartbeats on a red-haired girl at school named Ruby, who brings to school a book about sea creatures, all the mysterious ways of the sea, the salt calling to your senses, maybe, from three million years ago. Even when you have to stop going to school because of all the fainting, Ruby might stop by with a jar of tadpoles because she noticed you’re interested in sea creatures. Your mom would throw them out, of course, but your friendship with Ruby could blossom anyway to include heartbeat-expensive clandestine meetings and explorations of the marsh and books and the world – “Everything, Tom thinks. follows a path worn by those who have gone before: egrets, clouds, tadpoles. Everything.” – might culminate in one single kiss before the Depression hit and nothing would be the same; Ruby disappears from your life, your mother dies, the boardinghouse is foreclosed, and you move downtown to find Mr. Weems, one of the boarders who was like a grandfather to you; he gets you a job in the maternity ward of the hospital, where you encounter Ruby, now a Mrs., again.

Who knows, you might live to be twenty-one, in spite of all the profligate heartbeating. And that might be just long enough for one ineffably sweet trip to the aquarium with Ruby and her baby.

For a moment Ruby is being slowly dragged away from him, as if he were a swimmer caught in a rip, and with every stroke the back of her neck recedes farther into the distance. Then she sits back, and the park heels over, and he can feel the bench become solid beneath him once more.
I used to think, Tom says, that I had to be careful with how much I lived. As if life wa a pocketful of coins. You only got so much and you didn’t want to spend it all in one place.
Ruby looks at him. Her eyelashes whisk up and down.
But now I know life is the one thing in the world that never runs out. I might run out of mine, and you might run out of yours, but the world will never run out of life. And we’re all very lucky to be part of something like that.
…
A trapdoor opens in the gravel between Tom’s feet, black as a keyhole, and he glances down.

Anthony Doerr has a way of melding setting with character and plot. The salt mines fade into the background as the story goes on, as the sea receded from Detroit, but salt remains as the tinder that starts the ball rolling and in Tom’s ongoing fascination with the sea. In his Contributor note, he recounts how the story came alive: he started with an interest in the life in the oceans, life we’ve only known about for a tiny fraction of our intellectual history; that story was, he says, “heavy on atmosphere and light on humanity.” He put it aside until a television news report compared the current recession to The Great Depression, at which point he researched the era to see how similar or dissimilar it was. Eventually the two ideas came together in one story, with Tom’s heart condition bringing “the right pressure.”

Ann Graham made an observation that added to my enjoyment of the story: “The present tense seems like it would make the story feel close and immediate but it doesn’t feel like that. But, what I think is the theme, living in the moment, the present tense is perfect.” I wouldn’t have thought of that. But she’s right: it is perfect.

This story won the prestigious (and valuable) London Sunday Times EFG Private Bank Short Story Award. You can watch a lovely reading of a significant excerpt (about six pages) by Damian Lewis from WordTheatre’s Sunday Best from the Oxford Literary Festival, part of the lead-in to the announcement of the winner of the Award.