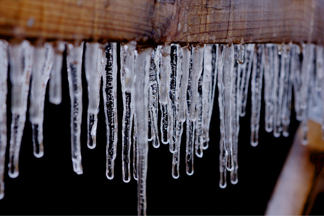 His father whittled a block of wood into a duck for the unborn baby before he took his penknife and dug it into the tip of his thumb. When the blood rose to the surface of the skin and trickled down his father’s hand, Caleb looked away, nauseated. His father swung him around, softly, and held up the sliced thumb. “It’s just blood,” he said. “It gets out sometimes and that’s not the worst thing in the world.” Caleb held out his hand, and his father made a quick slice into the boy’s own thumb. When the blood bubbled up, Caleb and his father laughed. “Blood’s nothing to worry about,” his father said, and Caleb felt safe, another lesson learned. His father regarded the half-whittled duck, now streaked with brown-red blood, and threw it into the woods surrounding their cabin, the expanse of trees so dense for miles in every direction that it seemed to Caleb that no one else in the world existed. “Don’t show your mother what we’ve done,” his father said, and Caleb nodded. He wondered how long he would have to wait until he could retrieve the duck for himself.

Something interesting happened while I was reading this story. The father, Felix, who started out, in my mind, as a wise old geezer, got more and more foolish and younger and younger, until by the end he was, again in my mind, barely a teenager. Let me emphasize his actual age did not change, was never specified to begin with. He just seemed a lot more mature in the first half than in the last.

There’s more than enough nuance and structural intricacy to earn a “Literary/” label, but it is a Horror story. A couple lives in the woods with what Linda Furman in her introduction calls “the joyful, arrogant belief that they can make a new Eden and raise their child in a utopia.” And we all know how Utopian stories end.

Charles May notes that the story begins and ends with blood (he often sees a lot more in these PEN/O.Henry stories than I do). I found the opening quoted above to be quite gripping, and was relieved to find Caleb “felt safe.” I became more dubious when Mom had the idea to show Caleb how babies were made by, well, showing him how babies are made. Fortunately, Dad balked, in what turns out to be his final show of common sense.

Mom insists on giving birth at home, when the increasingly foolish Dad not only agrees to that but doesn’t even have another adult hanging around to help out if needed. They use it as an educational experience for six-year-old Caleb. It’s educational, all right, when Mom bleeds out after giving birth to a bear-child and Dad, finally realizing help is needed, skids on ice right off a cliff on his way to obtain it. That leaves Caleb with the baby and the wooden duck that opened the story. I liked the continuity the duck provides.

More than the story itself, I’m interested in what Wilson says about its origins. He gives two somewhat different versions, though they’re probably the same but from two different points of view. In his Contributor Notes, he says before he and his wife decided to become parents themselves, he wrote “story after story about monstrous babies that ruined the lives of their parents.” That’s pretty interesting right there, imagining the inception of that creative urge – seeing himself as the monstrous baby? Or fearing what a someday-baby will do to him?

But when I’d finished the story, I had the impression the “real” story, the part I was most interested in, was yet to come: how did this day affect Caleb’s life, and what was his relationship with his bear-child brother – who took his parents from him, but towards whom he clearly feels responsible and protective – like as they grew up? So I was interested to read Wilson’s other explanation, in an interview with Ecotone, that this story was the aftermath of a failed and abandoned draft of a novel, “a Cormac McCarthy fairy tale” about a boy and his bear-child brother, an attempt to do justice for the characters he’d already created. Maybe the novel was itself part of the monstrous-baby-story binge.

But the story itself? I’m growing more and more discouraged with this volume. The next story, “Naima,” is one I already read when it appeared in The New Yorker, and I take some hope that things will be looking up from here.