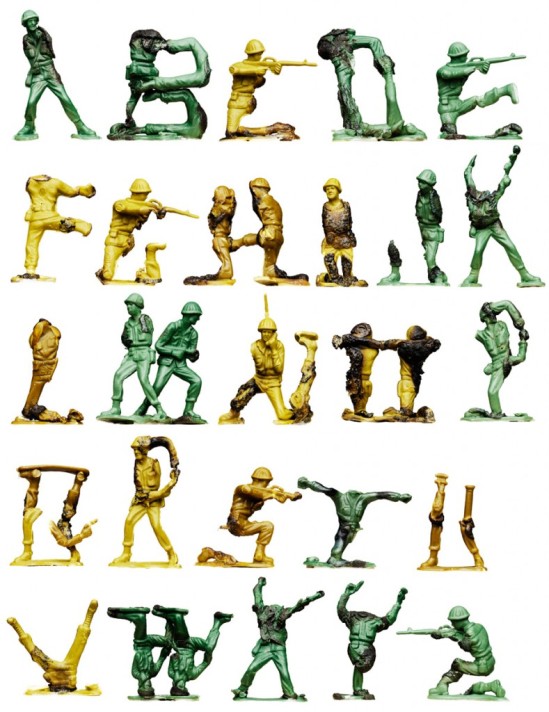 "Fire in the Hole" - a 3D alphabet by Oliver Munday

My colleagues and I are charged with deciding which soldiers should be killed in the war, as well as where, when, and how they will die. At first I thought it strange that we should be orchestrating casualties for a war that ended before my grandparents were born, but the human resources executive who hired me explained that the war was not, in fact, over, that wars never actually end, and must be continually refought, at least for as long as they are remembered.

The narrator – (Oh, the woes of the unnamed first person narrator story. To be honest, I don’t even notice it when I’m reading. In fact, I’m a big fan of first person fiction, both as a reader and as a [sometimes] writer. It’s only when I talk about the story that it gets awkward to keep referring to “him,” especially if/when there are other “him”‘s who must be differentiated from the main character. In most cases, as in this case, the unnaming seems to me to be deliberate. No one in this story has a name, other than Stan Laurel. Oh, and a person who the narrator makes up, but that hardly counts. I just think it’s worth noting that the author makes up a nameless character who makes up a named character, and the named character is far less real than the nameless one) – is telling his story from the ballroom of an old mansion, where, as described above, he determines the fate of soldiers in The Great War. Unsurprisingly, his supervisor has provided guidelines for this. Dying while marching in rank formation, instantaneous death, and, when large numbers of deaths are called for, a single event such as a bomb killing many soldiers at once, are preferred. But not always possible.

In the next room, separated by a mirrored door which keeps swinging open due to a faulty latch, our narrator can hear the sounds of a movie production, probably Babes in Toyland, starring a very elderly Stan Laurel.

As a consequence, even when we are preparing for our most important battles – Verdun, for example, or Cambrai – we are constantly serenaded by the tinkling of toy pianos and the clattery crescendos of wind-up monkey cymbal bands.

Now, devotees of The West Wing will jump up and down at this point. In delight, perhaps (“Hey, this is just like the Season 4 episode The Inauguration, Part 2 – Over There), or annoyance (“Hey, this is a knockoff of when President Bartlet was deciding whether or not to send troops to Kundu to end the genocide and watched the Laurel & Hardy Babes in Toyland because it just happened to be what his visiting grandchildren left in the VCR and it inspired him to change American foreign policy”). We might even work in the faulty latch on the door in the Oval Office during the storm scene of the Two Cathedrals episode. West Wing fanatics never forget, and they still gather at TWoP because everything reminds us of TWW.

But what we have here is a very different story, even if it does use the juxtaposition of war and a goofy play-war movie.

Our narrator consults with a soldier whose mission, as it were, is about to conclude, as the supervisor puts it (reminding me a bit of A Taste of Armageddon from Star Trek, S1E23) and some difficulty arises. The soldier, quite reasonably, doesn’t want to die. He’s fine with someone else dying in his place. The narrator tells him to go find James P. Hall, who can help him, and the soldier leaves to find Mr. Hall.

The truth is James P. Hall is an entirely fictitious name that I conjured out of thin air. But I have every confidence that once the soldier gets down to the precinct where I directed him, and asks where Mr. Hall might be found, none of my colleagues will trouble to determine whether Mr. Hall actually exists. They will simply dispatch the soldier to yet another precinct, or to yet another authority. And every time he asks for Mr. Hall, this process will be repeated and repeated, until, finally, the soldier will either succumb to bewilderment and exhaustion, or develop the fortitude to accept his fate and go to his death with the dignity and resignation of a true hero – the encouragement of such fortitude being, of course, the primary reason we give soldiers the opportunity to come to terms with their fate in advance.

At this point I flashed to Catch-22. It also sounds like something a local city hall clerk might pull on someone trying to escape a parking ticket, or perhaps like an experience with customer service at Time Warner Cable (don’t get me started…)

It certainly occurs to me that this idea of personally facing people who are to die before you decide a cause is worth fighting for isn’t a bad one. In fact, I now recall the trailer for Rachel Maddow’s new book Drift which, though I’ve been hearing about the book for some time now on Rachel’s nightly show, I just viewed today, oddly enough, and heard her talk about the widening gap between the nation and the military – and how that separation is perhaps making it easier for “us” to decide when to send “them” to war. It might be harder if we had skin – ours or a loved ones – in the game ourselves.

Somehow I insist on jumping outside this story into others. That isn’t necessarily a bad thing. It doesn’t necessarily mean the ideas are derivative or well-trod, especially in this case, where a fresh twist is provided at every intersection with other material; it’s just that certain facets bring to mind something else. In fact, I like it when a story becomes a nexus for several other works. I just hope the author wouldn’t be too upset that television features so prominently. But I go where I’m led. And I will further say, the matter-of-fact approach to the surrealism of this story, complete with scrambled timeline references, strongly reminded me from the first paragraph of Seth Fried, a recently acquired literary crush. Not to mention the dream-like aspects, which are indeed in Ishiguro’s The Unconsoled as well as the story he wrote to practice for that novel, A Village After Dark. That’s quite a compliment. In fact, all the touchpoints, for me, have been complimentary.

In his One Story Q&A, O’Connor recounted his inspiration for the story:

One evening last summer, I was walking in the woods, idly thinking about the wars in Iraq and Afghanistan, when suddenly I was struck by a bolt of guilt. Specifically, I thought that since I hadn’t worked hard enough to oppose those wars, I was to some extent responsible for them. The thought passed. The guilt receded—as my political guilt has a tendency to do—and two or three days later it was time to begin a new story.

Whenever I start something new, I try to keep my mind blank, and get out a first phrase or sentence without even thinking about it. In this case, what came out was my narrator’s statement about devoting every waking thought to the Great War. I had no idea why he was thinking about the war, or even that he was a “he,” but I did remember that bolt of guilt, and worried that I was in danger of producing an overly schematic political fable. So I decided to mix things up a bit and give myself a little more imaginative freedom, first of all by having my narrator working in the ballroom of an old mansion, and then by having that movie being shot in the next room—a movie which, to my surprise, turned out to star Stan Laurel.

So while there may be familiar elements – and there always are, in every story – this was an original and personal journey, and I’m thrilled to have been allowed to come along.

I see O’Connor has a couple of collections out, and I think I’m going to need to take a look at them. Anyone who takes me through Seth Fried, The West Wing, Ishiguro, Catch-22, Rachel Maddow, and Star Trek in 15 pages is definitely worth investigating.