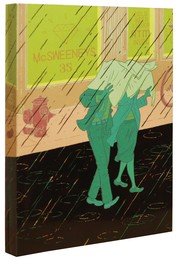 The Phantoms, which some call Presences, are not easy to distinguish from ordinary citizens: they are not trnanslucent, or smokelike, or hazy; they do not ripple like heat waves, nor are they in any way unusual in figure or dress. Indeed they are so much like us that it sometimes happens we mistake them for someone we know…. They themselves appear to be uneasy during an encounter and switftly withdraw. They always look at us before turning away. They never speak. They are wary, elusive, secretive, haughty, unfriendly, remote.

I want so badly to like Steven Millhauser. This is the second of his stories I’ve read recently, and I’m not really seeing the appeal. I enjoyed “Miracle Polish” considerably more than this piece. I think I’ll read his new collection, “We Others: New and Selected Stories” and see if I can develop whatever sense it is that makes him so highly revered by people I highly revere.

Sometimes I get the feeling that the BASS people want to make sure each annual volume contains a variety of stories, so they encourage – perhaps require – that perhaps a couple of non-traditional narratives are included. Maybe they want one speculative fiction story. With this story, they get two quotas for the price of one. Of course, I could be overcomplicating the process.

It’s written in the form of a report, describing the phenomonon of Phantoms in a small town. It’s broken into sections, including multiple Explanations (with evidence against each one) and Case Studies. I tried looking at is as a portrait of a small town, but that didn’t really work. Is there some significance to the study of things we don’t understand? Of course, but that seems like too small a payoff. The phantoms depicted in the case studies behave in different ways (probably why they were chosen as case studies; you wouldn’t pick all the same types of encounters, after all) and the people who experience them vary widely as well. I don’t even find it to be a particularly interesting examination of astral phenomena. I feel like a failure.

There are people who love cilantro, and those who insist it tastes like soap. This has led to speculation about a “cilantro gene.” Maybe I’m missing the Millhauser gene. That thought makes me sad. So I’ll keep trying. Eventually, I’ll get it.

Addendum: This story is also in the Pushcart 2012 volume, making me feel even more stupid.

And again: it’s in the 2012 PEN/O.Henry Prize Stories anthology too; three for three. I still don’t get it.