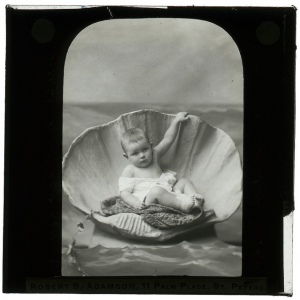 Is this what he meant by Venus on a scallop shell?

Hello, I am Zin! I am surprised that I am not quite sick of this already, especially since the first four episodes were not good at all. This is the next-to-last episode, and I think it is just enough!

The chefs arrive at Montauk by boat! Falkner can just see the clambakes on the beach! Zakarian says the Hamptons are famous for the beaches, great food, and rich people. He says he goes there a lot. Bankruptcy is not what is used to be, is it?

They go to the Montauk Yacht Club, and Chiarello starts babbling about the Vanderbilts. Boy, considering these guys are not exactly paupers, they sure get excited by rich people!

Alton Brown tells them they have $500 each and two hours to forage around the Hamptons, then two hours to cook. Forage? He makes it sound like they have to find edible plants and catch rabbits! They must make a three course seafood tasting menu for a party of twenty of the elite of the Hamptons culinary community plus the judges. The theme is passion, so they must put their passion on a plate. Alex lectures how passion is about making pickled eel even though no one really wants to eat it if they can avoid it. I think Alex has been out in the hot sun too long.

Since Falkner won last week, she gets an extra minute (I am not sure, something like that – my mind wandered) and she gets a boat to take her around. I would think a car would be more helpful, but I suppose that is how they do things in the Hamptons. The boat takes her to a fish market set up outside on a pier for their foraging convenience, right in the sun, which is such a great idea as Anita Lo will tell you – raw seafood and sun are a great combination, it got her kicked off Top Chef Masters! But it makes for a nice visual, and everything on The Food Network is more about appearance than reality.

Alex says they have limited funds in an expensive part of the world. Yes, Alex needs to get indoors fast. She wants to buy what others are not buying, so she gets fish bones for stock. Falkner is thinking cioppino. Zakarian worries about time. Chiarello buys fluke. They go to a farmers market to forage among the $12-a-pound tubs of butter. Everyone comes up with stupid ways to use “passion” in a sentence relating to cooking, like the pickled eel.

Two people will go home today, so only two go on to play the last round in Iron Chef Stadium. Alton explained how that would work, with the Showdown thing, but my mind wandered again. It does that sometimes. Then I call it and say, “Here, mind! Come on, come here!” and it comes back. Usually. I will figure out how the eliminations work later. The judges will consider the opinions of the Elite of the Hamptons Culinary Community (remember them?) in their deliberations.

Presentation to the Judges:

The judges get to sit inside for their dinner, unlike the diners who have to be outside.

Alex made 1) raw fluke with tomato jam with lime and fried fluke skin, served with a cocktail of muddled strawberries with rum and prosecco; she wanted a lot of red because red is passion. She wanted to communicate her, ahem, passion for nose to tail cooking, so she used the flesh, bones, and skin. But not the eyeballs! Shame on her! Morimoto would have used the eyeballs. And what about the innards? Fish innards are always part of the original Iron Chef! But that is inside-out cooking, not nose-to-tail. Michael Simon really likes the crunchy fish skin. 2) Smoked crab chowder, leeks, clams, bacon. Simon thinks it is too salty, but Judy loves the seasoning. Early in her career before she had any idea what she was doing, she made clam chowder, and the chef she was working for said it was great, so she wanted to make it here. 3) Lobster with poached egg and hollandaise. To Alex, lobster and eggs are like corn flakes and milk. She must have some interesting breakfasts! She was happy to tear that lobster limb from limb to get it on the plate. Well, that is pretty much what you have to do with lobster, you know, boil it alive and dismember it! It is a very violent dish! Michael Simon thinks it needs more salt. Judy thinks it is too rich, there is too much hollandaise. A couple of diners say they do not like the tomato jam, it is too strong.

Falkner serves 1) vichyssoise chowder with potato, leek and fennel. Simon licks his bowl. It is quite disgusting. Judy likes the baby greens on top. Michael Simon says it is spectacular. 2) Smoked scallop on corn puree with English peas and asparagus. Simon wants more smoke flavor. Michael Simon thinks it is a bit one-note with the sweetness. 3) East Coast Cioppino, with lobster poached in saffron butter, and a filet of sea bass plus some grilled squid. Michael Simon loves the lobster. Simon wanted crunchier skin on his fish, it is a bit flaccid (and he pronounces it correctly, as a Brit would – I will have to take him off my shit list!) One diner says the scallop is bland; another likes the soup.

Zakarian is passionate about his family. He likes to take them to St. Barts, like any good bankrupt 1%-er would. He makes 1) seabass salad with endive and celery roll up and a ginger agrodolce. Judy says it is spicy and vibrant. 2) Because he also loves the Mediterranean, he makes blackfish minute steak and lemon taponade. 3) To honor Brittany (the region of France, not the singer) he serves roast scqllop sausage “sandwich” with couscous risotto. Michael Simon says the sausage texture is perfect; Simon says it is not the prettiest plate. A diner says he can taste the passion. Eww. Another thinks the blackfish is too fishy.

Chiarello shows them passion through the ages. 1) Tuna crudo arrabbiata with seed pod of tomato, because tomato is often considered the foribidden fruit. Simon likes the garlic. Judy likes that it looks like seaweed. 2) It was a fluke that he met his wife (Alex gets a little grumpy – “this is not the story telling competition”) so he makes smoked fluke with gribiche, bacon and eggs, crostini, and a scape puree. Michael Simon says the fish is cooked perfectly. 3) Venus came to Rome on a scallop shell, so he makes scallop with carrot caponata puree. Simon likes the control of coriander and fennel, they can be overly strong but it is good here. Michael Simon thinks the scallop is a little overcooked. Chiarello interviews that is impossible! A diner says it is indeed overcooked! Someone else thinks his tuna is the best dish of the day.

For some reason the judges compare the men and then they compare the women, like there was some pairing they did not tell us about! That is ridiculous! Oh, wait, maybe it was that Zakarian and Chiarello did the best, and Alex and Falkner were the worst. And – ah, here it is, see, I said I would pick it up later – there will be a winner who will be safe to go on to Kitchen Stadium next week, and a loser who will go home, and then the middle two will do the Last Chance Kitchen. Or whatever the hell it is called on this show. Second chance? No, Showdown! Whatever.

Zakarian is the winner!

Alex is the loser! Good bye Alex! She is disappointed but she is the almost-almost-almost Iron Chef. She did not get inside soon enough, obviously. The judges tell her the lobster dish had flaws in the seasoning, the hollandaise overwhelmed it.

So Falkner and Chiarello do the showdown thing.

They must cook: product placement crackers and wine. They have 30 minutes to make three bites, one with each variety of cracker (regular, pretzel, and flatbread).

Falkner makes shrimp and grits on the regular cracker, to take advantage of the buttery flavor. She makes chicken liver mousse with red wine syrup and crispy shallots for the pretzel cracker, and a curry lamb meatball with merlot reduction and raita on the flatbread cracker, to impress Simon with her Indian flavors.

Chiarello fills three shot glasses with cracker crumbs and puts the food on top: a chicken liver mousse with cabernet mustard and caramelized pretzel, a sardine escabeche with panzanella, and whipped Sonoma goat cheese with cabernet “caviar.” He does not use the calcium chloride to make the caviar, but gelatin and drops it in cold canola oil so it will set. Judy wants to taste the caviar more; Michael Simon is impressed he made caviar in 30 minutes. Simon says there are not many levels of flavor. Chiarello argues he was going for texture.

They discuss. Falkner did not do as well in plating. Chiarello had the strongest single bite (the chicken liver) and the weakest (the caviar).

Chiarello is out, Falkner is in. Yay! I am glad, she is my favorite, though I am surprised, I did not think she would be.

Zakarian was on Iron Chef America, and lost battle Sardines to Morimoto. Badly. He has been on Chopped where he got to the finals in the All Stars challenge. And he was on that stupid Scott Conant 24 hour restaurant show. He has serious culinary chops; he started at Le Cirque. And he filed for bankruptcy protection early this year when a bunch of former employees sued so he could continue to run his four fireplaces and take his family to St. Barts and the Mediterranean. I still do not understand how this bankruptcy works. And I think it is in bad taste for him to be bragging about his life on television. But he can cook.

Falkner was on Top Chef, the original flavor, in the Sex Shop Dessert challenge. She was even more memorably (how do you get more memorable than that?) on Top Chef Desserts for the Candy challenge, the episode famous for the line, “The Red Hots Are For My Mommy” and she was very kind to the kid, trying to get him to pull himself to get together, so she has grace under pressure. She too was on Iron Chef America and lost to Cat Cora in Battle Honey by one point (but both scores were in the 30s which is very, very low!). She was on Top Chef Masters in the first season but did not get out of her preliminary group! And she was on at least one of those silly Food Network Challenge shows. She started as a pastry chef, but now has branched into Savory (except both her restaurants are closing – maybe she is going to become a full-time TV chef!). She is a very out lesbian. And she is a She! They need a She on Iron Chef America! The lesbian part is just a bonus!

The only thing I am sure of is that this was decided before the show started filming, and it was based on demographics or contract negotiations and has nothing to do with cooking!