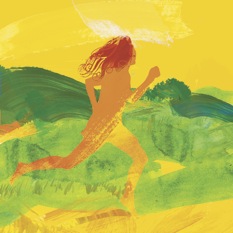 Part of me wants my father to leave me here while another wants him to take me back, to what I know. I am in a spot where I can neither be what I always am nor turn into what I could be.

This story is available online at The New Yorker where it was originally published.
An interview with author Claire Keegan can be found online at the Guardian.
(I’m experimenting with a new posting format. Feel free to comment)

Here’s another story that fed into my desire to take a few days off. I hadn’t read it yet, but I knew it was next in line, and I wasn’t looking forward to it. Why? Because everyone loves it. I can be stubborn that way. It’s one of those stories that’s universally acclaimed as a sensitive look at a poor rural Irish girl’s summer away from her family, carrying on the great tradition of Irish writers, described with it words like “insightful,” “moving,” and “extraordinary.” I love insightful, moving, extraordinary works. It just didn’t sound like the kind of story that’s up my particular alley; a matter of personal preference, rather than evaluation of greatness. So, being in a certain frame of mind, I wanted to avoid it. Sometimes I take things head on, and sometimes I hide in a corner with a blanket over my head.

It’s a good story. It’s slightly longer than most New Yorker stories, but it kept my attention throughout, I had no trouble first-reading it in one sitting, and I enjoyed it. But it’s not the kind of story I start dancing over and run around telling everyone they must read it. Plenty of people I respect feel that way about it, and that’s fine. I’ll stick with “it’s a good story.”

I gather this was originally a “long short story” (Keegan does not consider it to have the rhythm of a novella) and was abridged forThe New Yorker. The full version was published as a stand-alone paperback in February 2010. It’s set in 1981, apparently defined by reference to an IRA hunger strike. It seems much older than that. But I don’t know much about rural Ireland.

A young girl, our first-person narrator, is sent to live with another family for a summer. Her parents, Mary and Dan, are very poor and have several children; Mom is about to have another. It’s implied she’s sent away because they can’t afford to feed her. The couple taking her in, Edna and John Kinsella, might be the mother’s relatives, perhaps an aunt or cousin; it’s never explicitly stated. They aren’t poor, and they have no children. The little girl isn’t named; the Kinsellas refer to her as “Petal” and “Long Legs.” When her father drops her off, he tells the Kinsellas they can “work her.” They assure him they won’t have her do more than help Edna around the house. Dad doesn’t seem to care much. He tells some lies about the great hay crop he’s harvesting, and promises to send money for her room and board, though he doesn’t.

The Kinsellas seem welcoming, and over the summer the girl learns about wells, about wakes, and about heifers. She learns the couple had a son who drowned. There’s a lot of reading between the lines to be done. Such as:

I keep my foot in the water, and then, when I thin I can’t stand it any longer, my thinking changes, and I can.

“There are no secrets in this house, do you hear?”….
“Where there’s a secret,” she says, “there’s shame, and shame is something we can do without.”

“You don’t ever have to say anything,” he says. “Always remember that. Many’s the man lost much just because he misses a perfect opportunity to say nothing.”

When it’s time for her to go back home, she wishes she could stay. Just before her departure, she visits the well to bid it goodbye, and falls in, leading to a frantic attempt to keep her from catching cold. I’m thinking the son didn’t drown, but died afterwards of some kind of pneumonia. Edna’s concern is way beyond what might be expected, beyond the girl’s understanding. Beyond my understanding, too, but I just accepted it as the reaction of a mother who isn’t done grieving one loss and now is faced with another.

The girl decides not to speak of the accident when she returns to her family:

…I have learned enough, grown enough, to know that what happened is not something I need ever mention. It is my perfect opportunity to say nothing.

To me, this is a little over the top, but it’s nice anyway.

The last scene is heartrending, with her clinging to John’s neck and watching her father approach over his shoulder: “‘Daddy,’ I keep warning him, keep calling him. ‘Daddy.’ I love the phrasing of that – she is warning Kinsella that her father is approaching, and calling him Daddy as well (her own father is “Da”).

That’s an aspect of the story I like very much, who is called what. It’s very well done – when the Kinsellas are called “the lady” or “he” or by their last names or first names. I also like how the idea of children belonging to parents, as seen from a child’s point of view, is explored. At another, a storekeeper asks, “Isn’t your mammy good to you?” while she’s with Edna, and she isn’t sure how to respond. Later, John hugs her: “…he puts his arms around me and gathers me into them as though I were his.” And there’s nice imagery, with two lights on the horizon becoming three, the moon going in and out of the clouds, and reflections in the well.

Like I said, a nice story. Just don’t ask me to wax poetic about the great tradition of Irish writers.