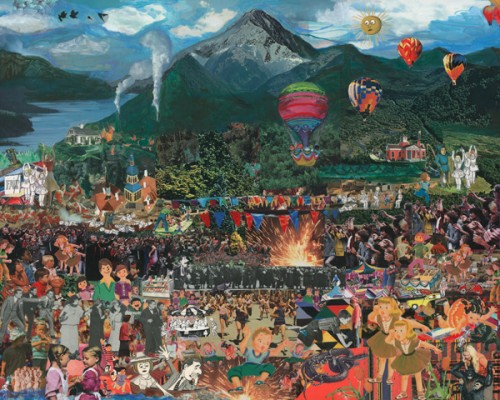 Art created for the story by Brandi Strickland

Last year, the people in charge of the picnic blew us up. Every year it gets worse. That is, more people die. The Frost Mountain Picnic has always been a matter of uncertainty in our town and the massacre is the worst part.

This is how the story starts. I was befuddled. I moved along anyway. I’m not befuddled any more – I’m awed. I between, I was amused, angry, and heartbroken. Oh, this is good stuff.

It’s so good, you should spend $2.50 plus postage and order it from One Story if you don’t have either the Pushcart volume or his just-out collection The Great Frustration (Soft Skull Press 2011) which includes it, or don’t want to check either of them out of the library. Seriously. It’s that good. It’s so good, I’m willing to become a marketing tool for an anti-consumerist work. The irony just sings, doesn’t it?

I’ve spent several days trying to come up with a way to comment on this story, and I still don’t know how to do it. I got all analytical about first person plural – the “we” voice. Rarely used, and something I consistently confuse with a sort of omniscient first person (which, I guess, is what the “we” voice really is; I’ll have to go see what Brian Richardson has to say about it in Unnatural Voices, and who knows, maybe I can get Zin to start a First Person Plural study). I copied large chunks of text, tried to break them down into sections. For example, the peculiar ways the massacres happened each year – not just bombings, but hot-air balloons that sail away never to return, port-a-potties containing venomous snakes, a radioactive Bouncy Castle. Methods so bizarre and yet real they maintain an air of fantasy and a grounding in reality at the same time.

There’s little Louise Morris, one of the victims the year of the silver-backed gorillas (not just gorillas; that would be buffoonery, but to specify silver-backed gorillas, that is a fine touch there) who is remembered and honored and so generates many changes – impeachment of the mayor, deportation of four Kenyan exchange students, and a three-day holiday in Louise’s honor – so many changes, that “the only thing that seemed at all the same was the Frost Mountain Picnic.”

But I can’t seem to get a summary that captures it. How do you capture this – parents who bring their children to this picnic every year, children who insist on going, because “all children are born with searing and trivial images hidden in their faces, the absence of which causes them a great deal of discomfort. It is a pain only the brush of a face painter can alleviate… ” – and when an alternative is considered:

It has been suggested that perhaps it would give our children more character if we were to let them suffer under the burden of the hidden images in their faces, forcing them to bring those images out gradually through the development of personal interests and pleasant dispositions, rather than having them crudely painted on….
None of us has the confidence in our children to endure that type of thing.

Oh, there’s so much more, the “difficulties we face in attempting to extricate ourselves from the Frost Mountain Picnic” because “most of us are involved with the picnic on many different levels, some of which might not even be completely known to us.” Are you getting the drift of this? Because while so much of this is giggle material, the story also makes a powerful point about the society we live in and allow to continue, how economics and war and politics and everyday life are tied together. And how we have, under the guise of making sure our children have it better than we had it, maybe done them a great disservice in perpetuating this intertwined network.

In his One Story Q&A with Pei-Ling Lue, Fried says he started out writing a story version of Dylan’s “Talkin’ Bear Mountain Picnic Massacre Blues,” though it evolved into its own thing. He gives a hilarious account of how he came up with so many strange methods of massacre:

I was still finishing my undergrad when I wrote this story. While generating ideas for the story, I had a page in one of my course notebooks that I titled, without realizing how creepy I was being, Ideas for Massacres. I filled it up with as many ideas for ridiculous massacres as I could think of while pretending to take notes in class. I then proceeded to lose said notebook. As a result, I spent the rest of that semester terrified of the possibility that someone would find that notebook and that I would be arrested for plotting to kill people by means of strategically set-loose gorillas.

When I was an angst-ridden adolescent, my father often told me to stop listening to “depressing” music and do something fun for a change. He never understood how alienated I felt by forced happiness, and how comforted I was to hear the lyrics of Don McLean’s “Vincent” or the words of Herman Hesse – somebody else out there got it, I wasn’t alone! And Fried makes a similar point: “If any of the anxieties expressed in this story are familiar to readers, I hope that readers will take comfort in seeing those anxieties on the page. I always feel relieved when I read a story and the author is expressing some concern about the world that I share. It’s cathartic.”

Maybe if enough people can see that what we have been thinking is normal is not-so-normal, the picnic will eventually change.