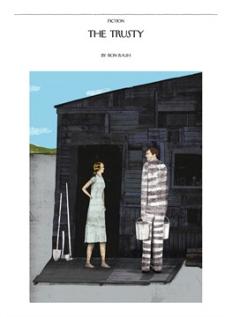 A decent suit, clean fingernails, and buffed shoes, and he could walk into a business and be greeted as a solid citizen. Tell a story about being in town because of an ailing mother, and you were the cat’s pajamas. They’d take the Help Wanted sign out of the window and pretty much replace it with Help Yourself.

There’s a legal term called “the doctrine of clean hands” that requires someone pursuing a lawsuit to have gone into the transaction in question with “clean hands” – as an extreme example, you can’t sue your partner if he takes off with the loot after a robbery. I had the feeling one character at the end of this story understood that doctrine thoroughly.

It’s a fairly simple Depression-era story about a chain gang prisoner, Sinkler, a trusty not shackled so he can fetch water for the gang, who plans an escape with a very young housewife, Lucy, married to Chet, a farmer twice her age. In his interview with Deborah Treisman, Rash mentions Edith Wharton’s “hard considerations of the poor.” Lucy’s poverty is palpable here: a pail is an object of desire, bargained over. The story is told 3rd person from Sinkler’s POV, a crucial decision, as we are left to assume Lucy’s motivations from her comments and behaviors, just as Sinkler is. They plot a mutual escape, him from his prison, her from her husband and life of poverty. Sinkler isn’t sure what he’ll do with Lucy – he needs her to get to Asheville, where he can get rail tickets westward, and he’ll probably take her along for a while, maybe abandoning her at the next stop, or possibly taking her along as a partner in crime, at the very least getting some sexual gratification from her in the meantime. He’s mulling all that over when things change on the way, through forest and brush and hillside, to Asheville.

It’s difficult to discuss much without giving away the ending. The word “trusty” is a pivot here. Remember the fable of the scorpion and the frog? “It is my nature.” But – considering the Wharton quote above – who is really the frog, and who is the scorpion? Are not both trusters, both trustees? The last sentence of the story carries a great deal of weight and changes what could be a routine story into something a little more interesting. For me it brings in the awareness of what options one has when one does not have “clean hands”, a sort of honor among thieves. And the quote above brings in some irony: this is a man who knows how to fool people using appearance.

There’s a wonderful comment by Betsy on the The Mookse and the Gripes website (there usually are, it’s a great blog. I’m not sure why it’s not on my Cool Sites list but it will be when I next update in a week or so) tying the “trusty” to our current recession and other political-economic instances of untrustworthy trustees.

When I saw Ron Rash was this week’s author, I was a bit nervous. I recently read his story “The Ascent” in BASS 2010, and was very negative about it (I admit freely I must’ve missed something). Though I wouldn’t call it a favorite, I enjoyed this story much more. I’m sure Ron Rash will sleep better knowing that.