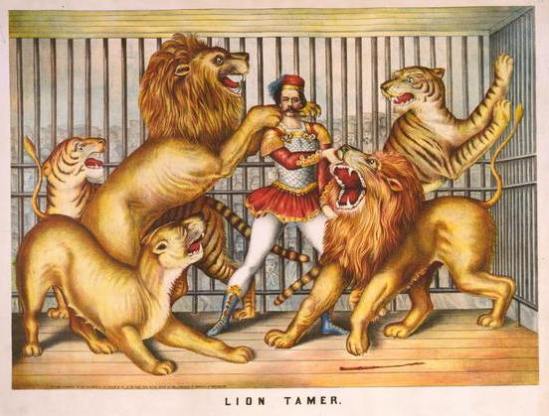 Hello, I am Zin! I now have my own account! I am officially a Contributor to A Just Recompense! I am very happy about this! I want a T-shirt too but I will settle for a Gravatar. We took all day to figure out how to do this and I hope this post works. We will have to figure out who does what stories but for now we agreed whoever liked the story best gets it so I am doing “My Last Attempt To Explain To You What Happened With The Lion Tamer” by Brendan Mathews – because how can you not love a story with a title like that?

It is not easy to write a story about unrequited love without getting all sappy and stupid and trite, so making the love triangle about a lion tamer, an aerialist, and a clown certainly helps avoid those things! I thought maybe Mathews worked in a circus for a while, but no, he was a nuclear weapons journalist before he went for his MFA. I did not even know that was a job! In his contributor notes (hey, he is a contributor too, just like me! But I think his contributorship is a lot more prestigious than mine) he said it took him five years to go from draft to story, with several major changes including the idea to put the “you” in there. I am still interested in the “you”. It is an unusual approach for a story and I think it works very well here, which is surprising, it could go bad very quickly but it does not. It makes me want to read more by this writer!

I love that this story is both surreal and very down-to-earth. I love the first line: “He wasn’t even a good lion tamer, not before you showed up.” Hah, I remember that writing exercise about first lines, and this one is a doozy. It sets up the situation, creates interest, and introduces the three characters. And all three characters are people I cared about very much! I knew from the beginning something would happen to the lion tamer of course, and I figured it would be bad, so it was not really surprising but somehow it was satisfying in terms of resolution. As usual the ending is not nailed down – this is something I need to work on, because I do not know that I could leave it literally up in the air like that, about the aerialist, but that is what fiction is now and I must learn to do this.

Richard Russo said on an NPR interview that he loved the story because of its whimsy and how well Mathews created a circus world. You can also read an excerpt from the beginning of the story in that same interview.

Thank you for reading my first review as a Contributor! Please let me know if you like it or not, so I can improve!

3 responses to “BASS 2010: Brendan Mathews – “My Last Attempt To Explain To You What Happened With The Lion Tamer””